There has been quite a bit of noise lately about Raon Digital’s Vega, a new, UMPC device. It had its own little viral campaign with mystery pictures and the surrounding “what is it?” buzz. More details are starting to emerge from the likes of CarryPad, Gizmodo, and Only UMPC. Looking very similar to the Dual Cor cPC, with the exception of quite a few controls on the surface, from what I’ve read this appears to be targeted at gamers and mobile media fans, who also need a full XP mobile device. 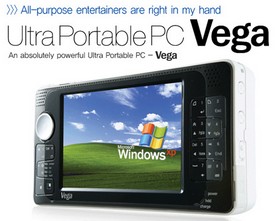 OnlyUMPC has a rundown on specs here and KCGadget has a hands on look at the Vega with a bevy of pictures to illustrate. Speculation says price will be under $700 US and a Korean release in September. Here’s a link to the product page. Notice the branding as an Ultra Portable PC.