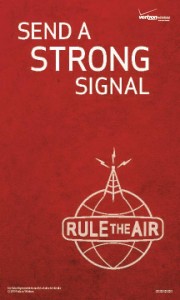 Verizon Wireless had a major press event at the Consumer Electronics Show in Las Vegas, re-affirming its commitment to a strong, rapidly deploying LTE network with downlink speeds of 5-12 Mbps (actual speeds for me ranged between 12-16 Mbps) and uplink speeds of 2-5 Mbps. The carrier had also announced 10 new devices with 4G LTE support: 4 smartphones, 2 tablets, 2 notebooks/netbooks, and 2 mobile hotspot routers. While Verizon Wireless was eager to announce supports from its partners, ranging from Skype to EA for delivering multi-player online games and video chat capabilities, to OEMs and smartphone makers on stage, one major partner–Motorola–was noticeably missing, and we can probably imagine why.

With the Wall Street Journal’s All Things Digital reporting that an iPhone announcement by Verizon Wireless scheduled for Tuesday, January 11th, the Tuesday after CES ends, Motorola’s absence at Verizon’s press event signifies that perhaps, with the introduction of iOS onto the network, Motorola and its Droid/Android status may not enjoy flagship status on the nation’s largest carrier.

Granted that Motorola did announce the Xoom tablet and the Droid Bionic Android smartphone just a day before, the carrier is still in Las Vegas the day of Verizon’s announcement and could have made an appearance. After all, despite having an announcement that afternoon for its AT&T Android products, Motorola did make the effort to show up a few hours earlier to AT&T’s Developers Summit at CES to support the carrier’s Android development. The same courtesy and goodwill could have been afforded ton Verizon, and the only reason we can think of why that didn’t happen is that there may be some conflicts of interest as the carrier will be bringing the rival iOS platform.

As a previous major partner of Verizon, Motorola has been the favorite child of the carrier; the phone-maker has enjoyed a close relationship with Google as well having launched Android 2.0 on the Droid.

With prior priority status, it was a bit dubious when after the three smartphones from HTC, LG, and Samsung were announced, Motorola’s high-end tablet and Droid Bionic Android smartphone were lumped together with a notebook, netbook, and some MiFi units as you can see in the video below:

However, you don’t have to take our word for it. We’ve pieced together some video clips that highlight the Verizon Wireless press event so you can enjoy the event as we saw it.

Video: Samsung’s CEO comes on stage to deliver its own 4G LTE smartphone

So, the missing party, whose Droid Bionic smartphone was demoed by Verizon’s PR reps after the press event alongside those from HTC, LG, and Samsung, was Motorola.

Below are video recaps of the Droid Bionic demo and the Motorola Xoom Android 3.0 Honeycomb tablet: