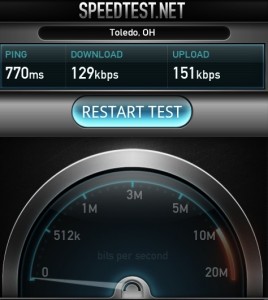 Verizon’s speedy 4G LTE Network decided it needed a day of rest before the Droid Charge arrives tomorrow as the second 4G LTE smartphone on Verizon’s speedy network. The Verizon 4G network went down late last night taking with it 3G connectivity for Thunderbolt users who have been booted back to slow 1x speeds.

The Verizon 4G LTE outage is nationwide and affects the HTC Thunderbolt as well as 4G Hotspots. The issue does not affect 3G smartphones on the Verizon network, like many Android devices and the iPhone, and is limited to 4G capable smartphones.

We’re aware of an issue with #4G #LTE connections & our network engineers are working to resolve quickly. Will update here.

We have determined cause of 4G LTE issue & are working with major vendors to restore connections. Details as they come.

If you can’t wait for Verizon to fix the issue, xda provides the following fix that will get you back on 3G speeds until the network is fixed. Personally, we are just using WiFi today, and hoping for a speedy recovery.

How to Fix 4G Outage on HTC Thunderbolt

Keep in mind you’ll likely need to change this back to get your phone back to normal after the nationwide Verizon 4G LTE outage is fixed.

The issue has cut speeds down from the incredibly fast speeds we are used to back to near dial-up speeds of 129kbps down and 151kbps up, compared to the normal 4G speeds that are measured above 12MBps down and 5MBps up or higher.