Verizon announced its third quarter earnings for this year, as well as providing an update on where the company is at as far as its 4G LTE rollout. While we knew the carrier was adamant about completely covering its 3G footprint with 4G LTE service, we’re surprised to see how much they’ve gotten done at this point. Verizon has announced that it has covered “more than 99%” of its 3G network with 4G LTE.

This means that anywhere you can get a 3G signal, you’ll most likely be able to pick up 4G LTE as well. In total, Verizon says that its 4G LTE service is now available to “more than 303 million people in more than 500 markets across the United States.” That’s a big chunk, and it’s confirmation once again that Verizon still dominates with the largest LTE network in the US.

As for smartphone sales, the iPhone was the big seller yet again. Verizon announced that iPhones accounted for just over half of all Verizon’s smartphone activations during the third quarter, compared to around 43% during the previous quarter. However, activations are different from sales, since activations include passed-down devices as well as used iPhones that are brought over to Verizon. 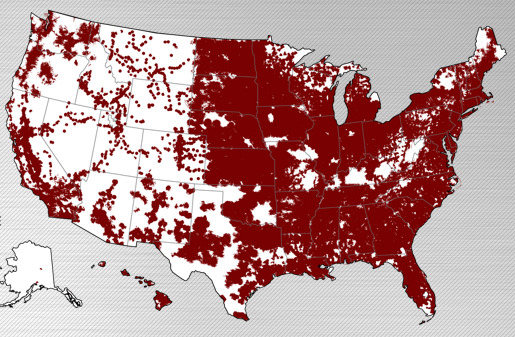 Verizon didn’t provide statistics on sales, but they ended up activating 3.9 million iPhones during the third quarter, out of the carrier’s total 7.6 million activations during that time. This includes the launch of the iPhone 5s and iPhone 5c, so the numbers seem a bit low, but it’s also up 25% year-over-year.

Verizon also added 1.1 million subscribers to its wireless service during the third quarter, totaling 101.2 million total subscribers, with 95.2 million of them being on-contract. Verizon’s userbase has steadily been increasing for the past couple of years, where they had just shy of 90 million subscribers back in 2011.

We’re still waiting on Apple’s earnings, which will be announced later this month. We should get an updated sales number as far as how many iPhones the company sold, as well as more detailed information as for how well iPhone sales are doing, but don’t count on Apple giving us individual sales figures for the iPhone 5s and iPhone 5c separately.