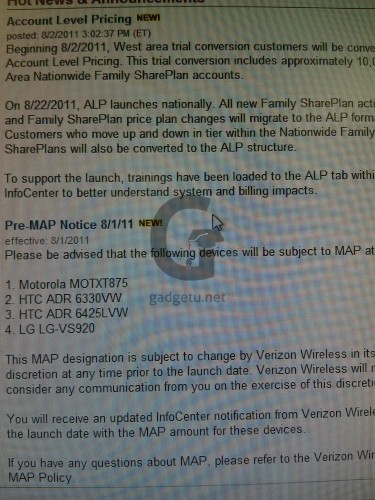 It’s no secret that Verizon Wireless will be moving to family shared data plans in the future now that tiered data plans are in full force, but before that happens, it looks like the carrier will first be implementing account level pricing, or ALP. The carrier is now trialing ALP in the western markets of the U.S., and full roll-out of ALP should happen by August 22 if a leaked document is to be believed.

Essentially, those on one of Verizon’s Family SharePlan will still maintain their overall plan and pricing, it’s just the billing that will change. Billing will now be simplified. Rather than bill items–data and voice–line by line, customers will see their whole account be assigned a bill rate. customers who wish to see item-by-item billing can still opt to do so.

The move is being pointed out by folks over at The Droid Guy as being a precursor to family shared data plans. The way that family shared data plans are believed to work is that rather than requiring you to buy a data plan for each individual device you have, Verizon will allow you to purchase data in buckets and allocate that however you wish to the many data-centric devices you own, whether those be tablets, smartphones, USB modems, MiFi devices, connected notebooks and netbooks, or e-readers. The potential is that data will become more fair–pay once and use it on any device you want–as we enter the world of tiered, metered data plans.