It appears Verizon will attempt to boost sales on its wireless network with a combination of discounts and activation fee waivers over the next week or so.

To be clear, Verizon hasn’t announced the deal yet, however screenshots of a training message sent to Android Central indicates that Verizon will offer users $100 off their service bill when they sign up for a new two-year service agreement and add a new line to their account. 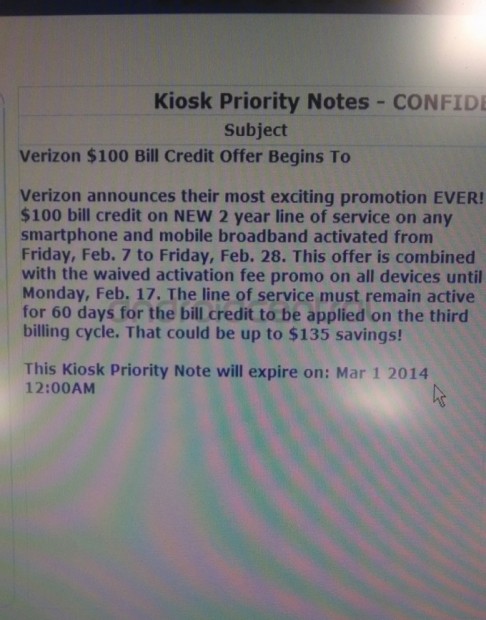 A leaked message about upcoming Verizon promotions sent to AndroidCentral.

The training message also encourages Verizon wireless employees to talk up another promotion aimed at getting new users up and running on the wireless network with as little financial output as possible. That promotion waives the $35 activation fee users would incur when they setup a new line.

Both deals are great news for potential smartphone buyers simply looking to add a family member to their plan or switch to Verizon from another post-paid or prepaid carrier. After all, discounts are discounts.

There are a few catches, however. Users looking to get the $100 service bill credit will have to keep their line active for at least 60 days before Verizon grants their account that credit. They’ll also need to move quickly. Verizon will only offering the bill credit until February 28th if this leaked message is accurate. Users looking to take advantage of the waived activation fees will need to move even more quickly. This message indicates that promotion will only last until February 17th – ten days from today.

Users who are looking to take advantage of these deals should consult GottaBeMobile’s 5 Best Smartphones available to Verizon Wireless users. The list highlights what specific features Verizon smartphone buyers should expect with each handset.

Almost all of the smartphones in that list are included in Verizon’s Free Phones & Tablets promotion. As of right now, anyone who signs up for a two-year service agreement with Verizon can purchase the iPhone 4s, Droid Ultra, Droid Mini and Verizon Ellipsis 7 at no additional cost. That deal only lasts until this coming Sunday.