If contracts aren’t your thing and T-Mobile’s UNcarrier mantra is more to your liking than the way the traditional mobile industry works, then Verizon may have a new tune to sing to you in the form of its new carrier financing model that will allow customers to buy their phones outright without having to stick to a long term contract model.

After a series of leaks late last week, BGR reports that Verizon Wireless has confirmed that any device that is priced higher than $349.99 will be eligible for the the financing. Users would have to purchase their phones with the full retail price and won’t benefit from any carrier offered subsidies. 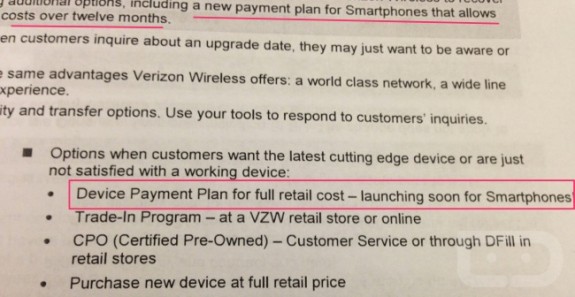 Unlike T-Mobile’s interest-free financing, Verizon’s financing is spread out over 12 months and the carrier will tack on a $2 per month finance charge to the account. This means that customers will have to pay a total of $24 in financing charge, which isn’t too bad of a deal as you won’t have to pony up the full $600 retail price of the phone out of pocket on the day that you purchase your device.

The downside with Verizon is that despite the new option to go UNcarrier, to take on T-Mobile’s parlance, the plan pricing is still the same for voice and data. T-Mobile argued with its UNcarrier initiative that as it won’t be subsidizing devices, it is using some of that corporate cost savings to benefit its subscribers by offering more affordable voice and data plans. The carrier announced a $70 unlimited option that will give users unlimited, unthrottled, uncapped 4G LTE data, though at this point in time T-Mobile’s LTE coverage is more meager compared to its larger rivals. On Verizon, you do benefit from the carrier’s large LTE footprint, but you may not reap the benefits of any monthly savings from Verizon in the form of cheaper voice or data rates as a result of not asking Verizon to subsidize your device.

With Verizon, if you do decide to leave the carrier and you currently own a Verizon LTE world phone, your next best alternative to use your current device and not have to buy a whole new phone would be to take your world phone to AT&T where it will be compatible with AT&T’s 2G, 3G, and 4G HSPA+ networks. Your phone likely won’t be compatible with T-Moile’s HSPA+ network, except in select limited markets where T-Mobile has turned on the compatible spectrum.

And it’s also unclear right now if customers who are grandfathered into Verizon’s unlimited data plans will be eligible moving forward for the financing option. When Verizon moved to metered plans and later to its shared plans, it announced that the only way for unlimited data customers to retain this legacy data plan would be to buy their equipment at full price when they upgrade. If customers upgrade with a subsidy, they would have to forego the unlimited data plan and choose a new plan that the carrier is currently offering. That said, it’s unclear if these unlimited customers can now upgrade and choose to finance their new smartphone while at the same time keeping their unlimited data plan.

In the past, Verizon had announced, along with AT&T Mobility and Sprint Nextel, that it would be watching T-Mobile’s UNcarrier initiative closely. The three larger rivals said that if T-Mobile was successful in weening customers off of subsidies, then they would also offer similar initiatives for their networks. And while Verizon isn’t jumping fully in, like T-Mobile is, this may be seen as Verizon testing the waters.