Verizon may not have had the best luck selling its own Droid branded tablets, but if guesses about what is being shown off in a new company video are accurate, it isn’t giving up on the concept.

Verizon’s DroidLanding social media account on Twitter, began teasing a new device early this morning with cryptic messages that included, “The story is unfinished. What happens?” Each one of these tweets have also asked followers to guess about what they think is coming, with the winning reward being a VIP trip to watch the company shoot its next Droid commercial.

The company also posted a new teaser video to its DroidDoes website. The video picks up exactly where previous commercials for the newly updated Droid line of smartphones ends. In the ad, the man from the previous commercials showcasing the always-on voice features of the last Droid models ends up trapped on a deserted island with a blond woman from one of the previous commercials, using his Droid device for all of their needs. The next morning he wakes up to find that she’s disappeared along with a case that she says is “in more capable hands.” 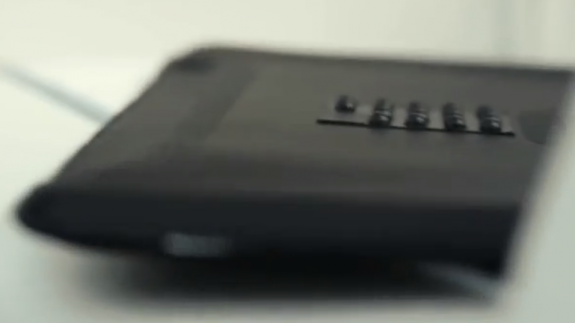 The case seen in the latest Droid teasers.

As the case seen in the video is too large to be a phone, it’s likely a next-generation Droid branded tablet, something that rumors have swirled about for some time. Potential specifications for the tablet remain elusive, however it’s likely that the device is the next generation version of the Xyboard branded tablets that Verizon partnered with Motorola to create in 2011 and 2012.

Both devices did absolutely nothing to stop the rise of Apple’s iPad, which is also sold on the network for around the same price as a Droid Xyboard 10.1 with LTE. With Android-based tablet marketshare finally beginning to stabilize, it’s likely that Verizon hopes it can finally claim a larger portion of the tablet market than it has in the past. If it can’t, it risks allowing Apple and other tablet makers free-reign in the space, something Verizon Wireless has been careful to prevent.

The new video doesn’t hint at an exact date for a reveal of whatever is inside the case in the new video spot.