We knew the BlackBerry Z30 would be arriving at some point this month on Verizon’s network, but the carrier has officially set a date. BlackBerry’s latest smartphone will be launching on Thursday, November 14 and will be priced at $199 after signing a two-year contract.

The Z30 is BlackBerry’s largest smartphone yet, with a 5-inch display and a 1280×720 resolution. It’s also the company’s most powerful phone to date, thanks to its 1.7GHz quad-core Qualcomm Snapdragon S4 processor on the inside. While BlackBerry devices aren’t so appealing anymore despite the company’s efforts to turn things around, the Z30 does include the latest BlackBerry 10.2 update, which comes with improved BBM messaging, notification previews and Priority Hub.

The Z30 was officially announced back in September as BlackBerry’s latest flagship smartphone, and will be a Verizon exclusive. It’s got the same battery capacity as the Nexus 5 (2880mAh), and while the display has a lower pixel-density than the Z10 and the Nexus 5, consumers will still get almost 300ppi out of the new display, which isn’t bad at all, considering that the iPhone 5s’s Retina display only sits at 326ppi. 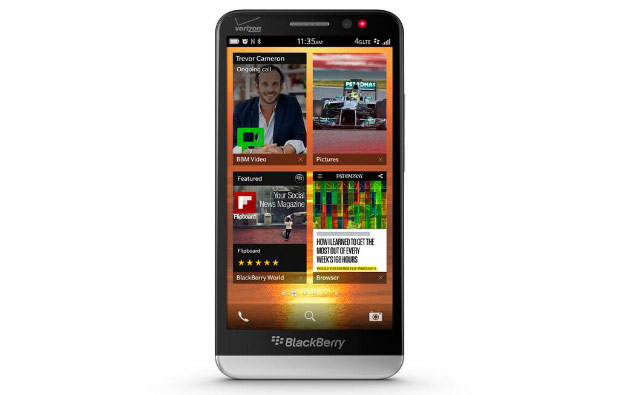 There doesn’t seem to be any pre-orders for the device, so if you’re wanting BlackBerry’s latest handset, you’ll have to take your chances and wait in line for it like the iPhone 5s. However, we don’t think the lines will be as long as what we saw on September 20 when the iPhone 5s was released; BlackBerry has been struggling to grow its userbase, and it hopes to do that with the Z30, but we’re not sure how well that will work, especially considering that the phone lacks in areas that other flagship devices excel in.

While BlackBerry 10.2 will come with the Z30, the update will also be headed to the Z10, Q10 and Q5. BlackBerry 10.2 includes a handful of features over BlackBerry 10.1, including enhancements made to the BlackBerry Hub, which now has a new Priority Hub feature that learns what users respond to most, and then presents them with notification ranked from most important to least important. 10.2 also includes improvements to BBM, such as previews of messages that pop up on the screen.