Like many of you, I woke up early last Friday to complete my iPhone 4S preorder.

I assumed that ordering direct from Verizon would simplify the hassles of adding another line to a family share plan. I also assumed that this was a simple process that would culminate in me giving Verizon a large sum of money and me receiving an iPhone 4S on October 14th.

How wrong I was.

Sadly, the issues began as soon as I placed my order. Despite being an account manager I needed the primary account holders SSN and driver’s license. OK, even though I had confirmed I had all I needed with customer support on Thursday, I could get beyond this.

After a few phone calls I had the information I needed and was able to place my order for the iPhone 4S mid-morning on Friday October 7th. During checkout and on my confirmation email I was assured that I would have my iPhone 4S on October 14th.

Update: Verizon has finally shipped my iPhone 4S. There are a number of others having issues. While I am glad to have my iPhone 4S on the way, the bak and forth needed to make this order happen is ridiculous.

Verizon appears to have things under control.

All the while, my online order status still had October 14th listed as a ship date.

Then on Wednesday October 12th, while dealing with the iOS 5 release date posts, I received another email telling me that there was a problem.

Before calling I checked my online status and found that Verizon had pushed back my order to shipping on October 28th and noted that I had not paid for the order.

Verizon now has no idea what is going on with iPhone 4S preorders.

Frustrated, I called in to Verizon again, 6 times over the course of the day. Each time I got a slightly different story, but was assured that my order had been paid for and that it would ship out on Wednesday. Multiple times I was told that I would get an email with tracking information before the end of the day.

Well, here we are a day before the iPhone 4S arrives on porches and in stores, and my credit card has not been charge and my order is still showing a ship date of the 28th.

I’ve called Verizon more about this issue than any other problem in my decade of service and have been incredibly disappointed with their service and support. This is just another reason why Early Termination Fees suck. Even if this was enough to push me over the edge, leaving Verizon is cost prohibitive.

I tried to use Twitter to get better customer support, but unlike Time Warner Cable’s awesome social media service team, @VZWSupport has no real power to fix issues. Their ability appears limited to saying happy things to excited customers and telling angry ones which numbers to call. Not a special, “something is obviously screwed up” high level customer service rep number — the same number you are told to call in your email.

At this point, it’s too late for Verizon’s online order team to come through, so I will have to go wait in line to try and get an iPhone 4s on launch day.

I’m not alone, @dt3 on Twitter learned that @VZWSupport can’t really do anything to help customers.

Another iPhone 4S issue at Verizon.

It looks like Alw on Twitter is also experienicng issues calling in for support. He was told that iPhone 4S orders won’t ship until tomorrow. 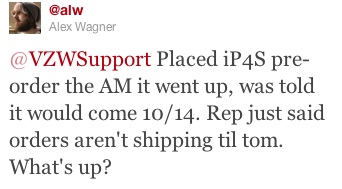 It’s absurd that customer support either doesn’t have the training or access to information needed to answer questions during the biggest phone launch on Verizon.

If you placed an iPhone 4s preorder with Verizon, now would be a good time to verify that it is shipping or has shipped.

Let us know what’s going on with your Verizon iPhone 4S preorder in the comments.