50% of all network traffic on Verizon’s Wireless network comes from video streaming, and LTE devices like the iPhone 5 Verizon pushed for are to thank.

That’s the message given by Verizon Communications CEO Lowell McAdam, who spoke Wednesday at the National Association of Broadcasters conference. He also noted that the carrier expects video traffic to double by 2017 and even talked of his time convincing then, Apple CEO Steve Jobs to include LTE in the iPhone 5. 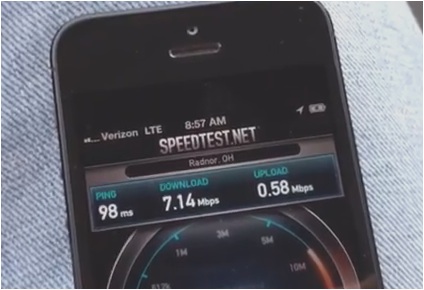 According to McAdam, he convinced the late Steve Jobs to include the technology saying;

“I was really trying to sell him and he sat there without any reaction. Finally, he said, ‘Enough. You had me at 10 Mbps. I know you can stream video at 10 Mbps.’ And Apple’s next phone was LTE.”

While speaking at the conference, MacAdam also credited Verizon’s next generation LTE data network as the technology making this kind of network traffic possible. Reliably delivering video to any wireless devices depends on sustained network connections.

Typically, wireless networks have a difficult time with establishing that sustained network connection with a mobile device, delivering videos that are intermittently punctuated by ‘buffering’ notices. These experiences were echoed in McAdam’s speech saying, “With 3G you have video clips but there is buffering. With 4G you can stream video.”

That the CEO of Verizon Wireless would be speaking at a gathering of professionals whose content is most known for propagating over traditional television sets and radios isn’t surprising. The National Association of Broadcast’s Technology Advocacy Program has been attempting to drive the proliferation of over-the-air radio and television into new form factors since 2007.

The Program funds research projects that are geared towards bringing broadcasting into the Digital Age. For example, it was a NAB funded project that led to Dell including television and radio tuners in its netbook product line.

The technology buying public has been on a slow march to using services and devices not traditionally thought to be video entertainment hubs. Netflix and services like it tend to offer mobile applications for watching content where ever users go. Together with the uptick in network reliability and bandwidth brought on by next generation LTE services in popular devices like the iPhone 5 and iPad with LTE, broadcasters are more likely to take chances on making their content easily accessible on mobile devices. Disney’s ABC is rumored to planning a subscription services that would deliver it’s a livestream of its programs directly to mobiles phones and tablets.

For its part, Verizon seems to want to take advantage of the new traffic though McAdam’s position is that potential moves by Verizon should be focused on so-called “companion experiences.”