We have been awaiting an announcement from Motorola or Verizon in regards to the upcoming 4G LTE Droid Xyboard tablets that are going to be launching and while we still don’t have all of the official details, Verizon has confirmed to CNET that the devices will be launching sometime in December although the carrier and manufacturer declined to give a specific date.

The Droid Xyboard aka Xoom 2 will come in two different sizes as expected, 10.1-inches and 8.2-inches, and will feature a thinner design than the original Motorola Xoom. They will also take heavily from the design of the Motorola Droid RAZR which was released last month.

Both tablets will run on Android Honeycomb and not Android 4.0. 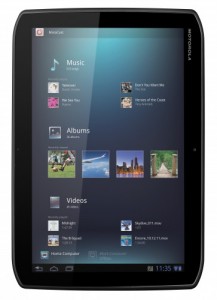 They will also feature a 1.2 GHz dual-core CPU, 1 GB RAM, and 16 GB internal storage, along with Corning Gorilla Glass displays. As for cameras, there will be a 5MP camera in the back and a 1.3MP camera in the front.

Apparently, the 10.1-inch Xyboard will come with a stylus as it’s intended for more business-centric customers while the 8.2-inch device will be more media focused and includes a 2.1 virtual surround sound system with a subwoofer.

Look for an announcement in regards to pricing, release date and specifications soon.