Verizon will reportedly launch an early upgrade program for smartphone owners that want the latest smartphones and need to upgrade as often as twice a year.

This news comes as T-Mobile Jump and AT&T Next offer customers faster upgrades and as Verizon locks down the traditional upgrade path to 24 months.

A leaked screenshot on Droid-Life shows details of a VZ Edge plan that will allow Verizon customers to upgrade to a new smartphone early, without the need to sign a contract for service. The plan will reportedly launch on Verizon on August 25th. 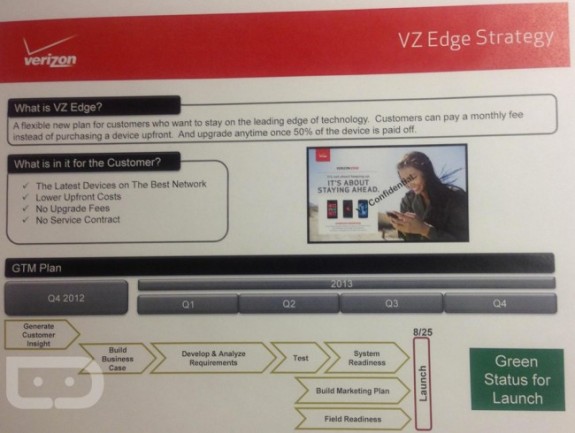 The actual VZ Edge details are limited, but the leak appears to show an early upgrade plan that i s aimed at users who are not buying subsidized smartphones. It may piggyback on the existing Verizon payment plan that lets users spread out the cost of a smartphone over 12 months.

While the plan requires a user commit to paying for the device, there is no contract for service. The current payment plan is popular for unlimited data users that want to keep unlimited data, but don’t want to pay full price for a smartphone up front. This feature may carry over to the VZ Edge plan. 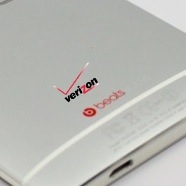 The VZ Edge program would let users upgrade to a new phone as soon as their current smartphone is paid off by 50%, which would mean a new smartphone every six months for most users. The plan mentions a monthly fee, but it’s not clear if there are any fees on top of the device payment. The current payment plan comes with a $24 finance charge.

The Verizon Edge training page leak doesn’t include details about trading in the old smartphone, but that is likely how Verizon plans to make the program work. Trading in the 6 month old smartphone will likely wipe out the remaining six months of payments

If this is an extension of the current payment plan, users can plan to use the program to purchase an iPhone or an Android device, which would let users buy a rumored iPhone 5S this fall, upgrade to the rumored Samsung Galaxy S5 in the spring and jump back to the rumored iPhone 6 in late 2014.

Normally an upgrade cycle like this would require buying phones at full price and seeking out a third-party trade-in service. Verizon’s VZ Edge plan would simplify this process and could be a better deal for Android devices which typically do not hold their value as well as iPhones.