In a sign that a launch could finally be on the horizon, Verizon’s HTC Trophy with Windows Phone 7 has appeared at Best Buy once again only this time it’s not on the retailer’s website, it’s in the flesh. 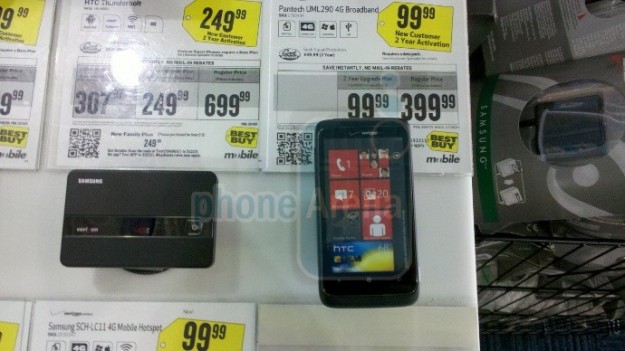 As you can see in the photo, a HTC Trophy dummy handset has appeared at Best Buy which means that the wheels are in motion for a launch which could come as early as May 12th or as far away as May 19th. Either way, it looks like Microsoft and Verizon are finally going to be getting the device out to customers after a long, long wait.

The HTC Trophy is going to be Big Red’s first Windows Phone 7 handset and it will be arriving with a 3.8-inch TFT display, 16GB of on board storage, a 5MP rear facing camera, and a 1GHz single-core processor. It’s not a beast by any stretch of the imagination but it’s definitely a very capable device.

Verizon will be the last of the four major mobile carrier’s in the United States to get a Windows Phone 7 launch with AT&T, T-Mobile and Sprint jumping on board long ago.

Anyone going to be picking one of these up when it finally hits shelves?