A new Verizon iPhone 5 deal could cut $100 off the iPhone later this month according to a new rumor.

The iPhone 5 traditionally starts at $199 for the 16GB model, but carriers are cutting the price of the iPhone in an attempt to battle for a bigger customer base and possibly to prepare for the iPhone 5S which is expected later this year.

A new rumor from @evleaks claims Verizon Wireless will offer the iPhone 5 for $99 in mid-May. Evleaks is well-known for leaking insider information about upcoming smartphones and carrier news.

This Verizon iPhone 5 deal is not confirmed, though the carrier is known for offering deals around Mother’s day every year, and may be feeling the heat form Sprint and T-Mobile. Both carriers sell the iPhone 5 for $99 up front, though T-Mobile requires monthly payments for the remaining balance.

The leaked Verizon iPhone 5 deal doesn’t include any details about which iPhone 5 models it is rumored to apply to, but odds are Verizon will offer the iPhone 5 deal on all size capacities. We also don’t know if Verizon will restrict the rumored iPhone 5 deal to new customers, or allow current subscribers to upgrade at a lower price. 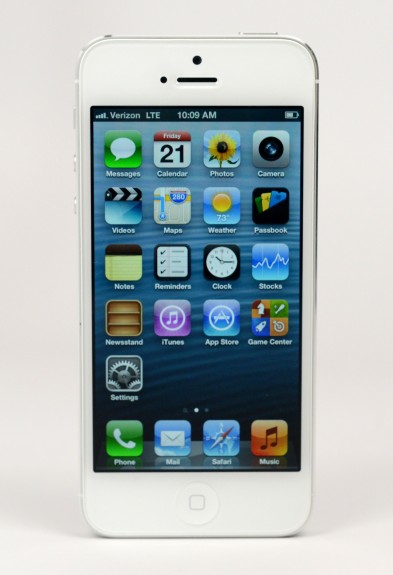 A Verizon iPhone 5 deal could arrive in mid-May cutting $100 off the price of the iPhone.

Traditionally iPhone deals are few and far between, but with the iPhone 5 Apple is allowing carriers and retailers greater flexibility with pricing and promotions. In late 2012 we saw a Walmart iPhone 5 deal drop the price down to $127 and various iPhone 5 deals drop $50 or more off at Best Buy and Radio Shack.

Sprint is currently offering the iPhone 5 for $99 to new customers, as part of a switch to Sprint promotion. Sprint’s promotion ends on May 9th, after which the iPhone 5 will jump back up to $199.

The iPhone 5 is 7 months old, but still remains one of the best smartphones available on Verizon. At $99, the iPhone 5 would arrive at least $100 cheaper than the Verizon Samsung Galaxy S4 and would be priced directly with the Samsung Galaxy S3, which is another top pick.

While unconfirmed, anyone looking to pick up an iPhone 5 for cheap may want to wait to see if this Verizon iPhone 5 deal arrives nea Mother’s Day.