Shoppers can buy the Verizon LG G Pad 8.3 for $199 on contract or $299 off contract. If you don’t plan to upgrade to a new tablet in the ext two years the $199 option is a decent deal, but if you can afford the higher off-contract price it is ultimately a better deal.

The Verizon LG G Pad 8.3 features features an 8.3-inch display with a 1920 x 1080 resolution, like most HDTVs. Overall the display is nice to look at and delivers a good user experience for binge-watching on Hulu Plus or watching an HD movie from Google Play. 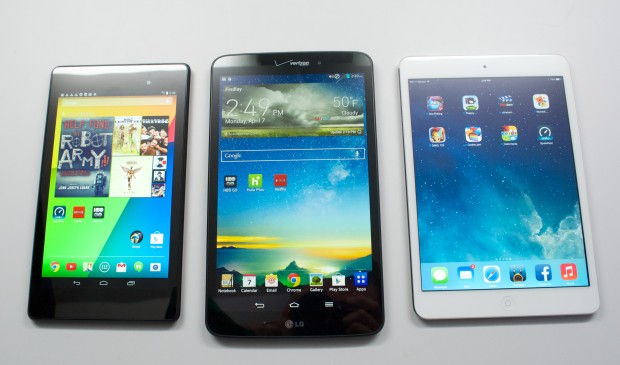 The LG G Pad 8.3 display is good, but not as bright as the competition.

The display is not as bright as the Nexus 7 or the iPad mini with Retina display, both of which are also available on Verizon Wireless. The display isn’t too dark to use or enjoy, but ultimately a brighter screen would be better.

LG took notes from the iPad mini and opted for a metal back that feels and looks great. The aluminum back curves up to the edges on the left and right, but LG includes plastic at the top and bottom of the tablet, likely for better WiFi and 4G LTE connectivity. 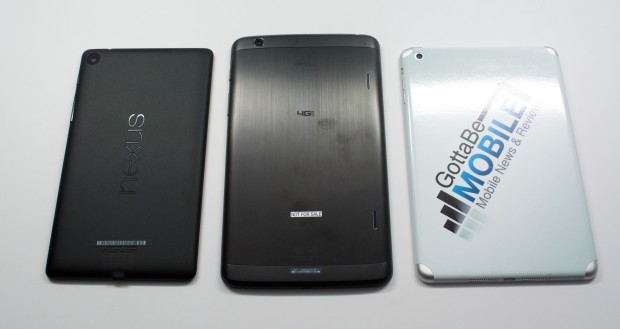 The LG G Pad 8.3 and the iPad mini offer metal backs, while the Nexus 7 is plastic.

When it comes to using the LG G Pad to surf the web using Chrome or play games from Google Play things are smooth, but there are some areas where LG’s software and the older version of Android get in the way.

Tap twice on the display to wake the tablet up without hunting for a power button. Unlocking the tablet and switching between home screens is quick and fluid. Switching apps is pretty quick, though holding the home button to access multitasking is a bit slow. When launching LG apps like alarm and voice recorder the app screen loads fast but there is an odd lag of a second or two before the app actually loads enough to actually use.

It is possible these issues come from the older version of Android that LG includes on the G Pad 8.3. Google is up to Android 4.4.2 and with the past two major upgrades Google focused on performance. There is a LG G Pad 8.3 Android 4.4 update in the works in Korea, but no official word on a Verizon model. Traditionally LTE tablets on carriers see updates well after a WiFi update.

The LTE connectivity on the Verizon LG G Pad 8.3 performs well in areas with good coverage. Unfortunately the Verizon 4G LTE coverage is nearly unusable in my neighborhood, resulting in download speeds of .22 Mbps and .50 Mbps upload speeds while near my house. Thankfully the WiFi connectivity is easy to count on at home, resulting in fast and reliable speeds. Traveling four blocks away, with a full 4G LTE signal the G Pad 8.3 delivers the fast 7 to 12Mbps down and 3 to 8Mbps up speeds that Verizon is capable of delivering.

There is a remote control app and an IR blaster that lets me control a HDTV and other home theater components with the tablet, which is a nice touch not found on the Nexus 7 or the iPad mini with Retina display.

I wouldn’t plan on using the LG G Pad 8.3 to take a lot of photos, but the rear facing 5MP camera performs well for the scanning documents into the tablet and with enough light can deliver a photo that is good enough for Facebook. The front facing 1.3MP camera will suffice for video conferences.

The Verizon LG G Pad 8.3 is a good tablet with a few areas where users will need to accept tradeoffs for the lower price. The G Pad 8.3 is leaps and bounds above cheap Android tablets that shoppers will find in big box stores and places like Walmart, but it is not that much more expensive than those tablets.

If you prefer an Android tablet and you are shopping with a budget the LG G Pad 8.3 is a solid choice for users that want a metal back and a larger screen than the Nexus 7 and who are willing to live with a slightly dimmer display and older software.