Earlier this year Motorola shocked many by announcing an all-new approach to smartphones. Of course we’re talking about the impressive Moto G offering excellent specs, customization options, and more all for just $179.

We knew Verizon and many US carriers had plans to offer the extremely wallet-friendly Moto X in early 2014, but a new leak and report today suggests that Motorola and Verizon have big plans. Big plans for a small price. According to 9to5Google the Verizon Moto G could arrive for just $100, no contracts required. 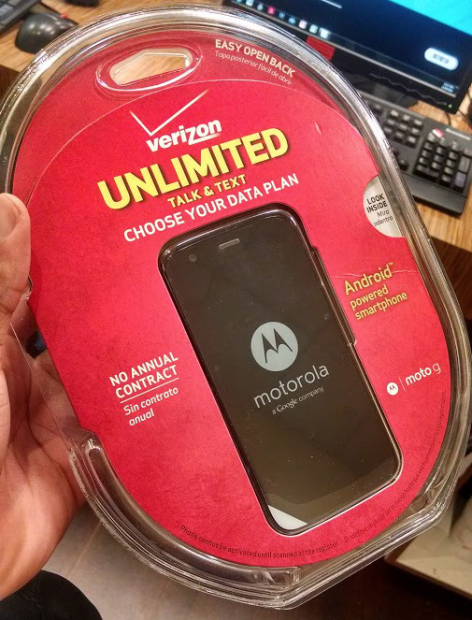 So what’s the big deal about the Moto G? It’s the best smartphone available to date when you consider the price, and Motorola has a real winner here. Offering a 4.5-inch 720p HD display, quad-core Snapdragon 400 processor with 1GB of RAM, 16GB of storage, 5 megapixel camera, and the latest Android 4.4 KitKat all for just $179. You heard us right. $179 with no carrier contracts.

The Moto G is the first of many budget devices we’re expecting from Google and Motorola in the new year, and if all goes according to plan the company could be selling them by the truckload over at Verizon. Motorola.com and some other countries currently offer the 16GB model for $179, and a 32GB variant for $199. Making it the best price/performance and all around deal available. Missing 4G LTE and rocking a mediocre camera are the only negatives to this relatively excellent and budget friendly phone.

Motorola confirmed Verizon and other main US carriers will offer the device completely unlocked for pre-paid customers in early 2014, and it looks like Verizon will be up first. Above is a leaked photo showing the device in full Verizon retail packaging, and the leakster claims Verizon will actually offer it for $99. Making it a crazy deal we’ll be recommending to friends and family for months and months.

That price is crazy, and no where near confirmed at this point, but that price was leaked along with the picture so we’re inclined to believe it for now. Verizon is expected to launch the Moto G within the first few weeks of January, so the wait shouldn’t be too long.