The Motorola Xoom Ice Cream Sandwich update has been approved by Verizon which means that it should be rolling out to owners in just a matter of days.

Droid Life has discovered that Verizon has posted the details to its website today which means that the update is good to go and should be rolling out relatively soon to Xoom owners who have stuck around.

The update is a little over 100MB in size and it’s going to be bringing a host of enhancements and fixes along with it, not to mention the features found in Android 4.0.

That entire changelog can be seen below. 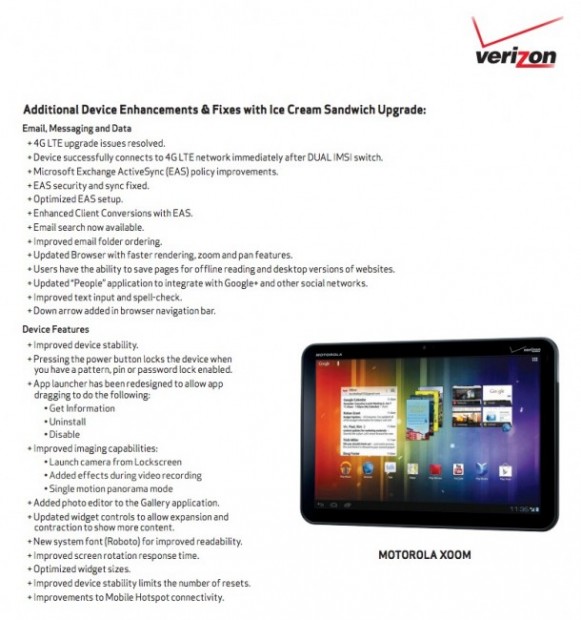 This shouldn’t come as much of a surprise to Xoom owners as a soak test for the update rolled out earlier this week, a sign that things were moving in the right direction.

Motorola also had promised that the update would be rolling out in Q2 and we currently just started the last month of that quarter.

The update is long overdue for those touting Verizon’s 4G LTE enabled tablet as the device has been sitting on Android 3.0 Honeycomb since it was released in March of 2011.

Owners have been campaigning for an update to Android Ice Cream Sandwich for quite some time now and the war drums only picked up after the Wi-Fi model of the Xoom got Android 4.0 all the way back in January.

However, it looks like Motorola and Verizon really did a good job of shoring up the issues as the changelog is immense.

Xoom owners, be on the look out for the update over the weekend. The Galaxy Nexus just went through a similar process and it only took a few days after approval for the software to roll out.