Yesterday, after weeks of rumors and speculation following months of silence from the carrier, the Verizon Nexus 6 release date was officially announced and confirmed. As of today the Verizon Nexus 6 is finally available, just as promised, however there’s a slight delay on shipping and it appears that this is only a pre-order.

Back in October Google confirmed its brand new smartphone was headed to all major US carriers, including Verizon Wireless. It was set to be the first Nexus smartphone offered by Verizon in years. Eventually the Nexus 6 was announced and released from all carriers in November, except Verizon.

As of today the Nexus 6 is finally available from all five major carriers in the United States. Before this, Verizon was the only one still not offering the new flagship device. Yesterday Verizon made it official, announcing it would be available online today, and in stores next Thursday, March 19th. However, it appears the online availability is only a pre-order. Read on for more details.

Verizon took to Twitter as well as its own website to confirm and announce the news, letting users know about the Verizon Nexus 6 release date, pricing, upgrade pricing and more. Sadly many though they’d be able to order it today with overnight shipping, but that doesn’t appear to be the case. The Verizon Nexus 6 release is still not yet here, as orders won’t ship for nearly a week.

Heading over to the Verizon Nexus 6 page you’ll see the device is finally available today, as promised, in the 32GB Midnight Blue color option for $249 with a new 2-year contract, $27.08 a month with Verizon Edge, or the expected $649 outright price. The surprise though is the Nexus 6 isn’t actually available today, this is just a pre-order, and it won’t actually ship until March 18th, mid next week.  Verizon also has a bundle offering a screen protector, case, and car charger all for $299 on contract. 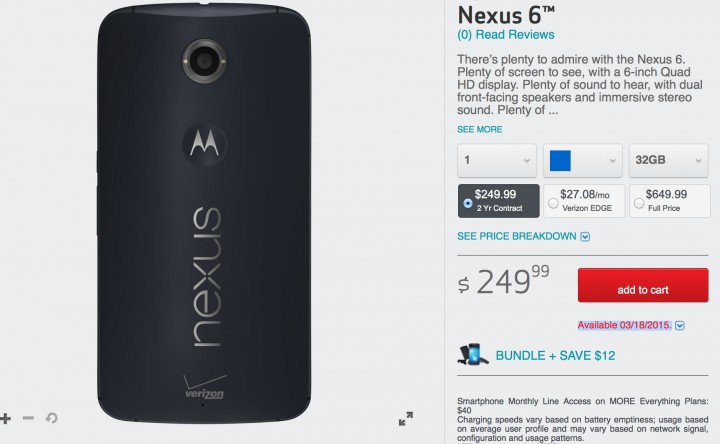 While typically smartphones are released after a short pre-order period, Verizon didn’t mention this anywhere in the release details post yesterday, and simply confirmed the smartphone would be available starting today, March 12th, and in stores around the United States on March 19th.

Instead, it looks like those buying online today can expect it to ship on March 18th, the day before it will be available in stores. It is worth mentioning that the site claims it will ship “by” March 18th, and not necessarily on March 18th. Meaning some users could get it earlier than that, but we’re not yet sure. We’ve reached out to Verizon for more details and will report back once we learn more.

The wait is finally over, and after a little over four months the Verizon Nexus 6 release date is finally here, almost. Just a few more days and it will be available in stores, and it’s available right now for pre-order from the Verizon website. Those looking to snag the all-new Verizon Nexus 6 can check out our list of the 80 Best Apps above, or for more details see our full Nexus 6 Review. The Verizon Nexus 6 will be running the absolute latest Android 5.1 Lollipop out of the box, the software just announced this week by Google. Enjoy!