If you’re interested in the Atrix 4G and the Droid Bionic, both made by Motorola, because of the smartphone’s ability to quickly convert into a netbook via the optional Webtop-based Lapdock accessory, then you may want to give Verizon’s network a closer look for two reasons.

First, currently, Verizon’s 4G LTE network offers better speeds in most cases compared to AT&T’s 4G HSPA+ network. On the flagship Droid Bionic on Verizon, the carrier’s promising download speeds somewhere in between 5-10 Mbps and upload speeds between 2-6 Mbps, and those speeds are spot on in real world settings. HSPA+ on AT&T’s Atrix 4G can theoretically deliver download speeds up to 14.4 Mbps, but in real world settings, speeds were less than half that value in my area. 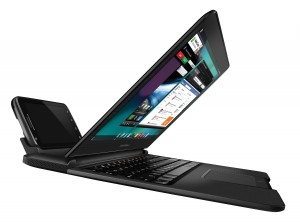 Second, if pricing is a concern–and this is specific to customers who are interested in the Lapdock accessory–then Verizon wins here. While AT&T offers a standard 2 GB data plan for $25 a month, the carrier requires a $20 tethering add on for use with the Lapdock on the Atrix 4G. In contrast, Verizon Wireless only requires the standard smartphone data plan and no tethering is required, according to a PR spokeswoman at the carrier’s New Jersey corporate office.

So in use, Verizon requires the standard $30 per month data plan for 2 GB of data, which is $5 more expensive than AT&T’s comparable plan, but doesn’t require users to sign up for the $20 tethering package to use with the Lapdock. And Verizon’s pricing makes more sense as the modem, Webtop OS, processing power, RAM, and storage memory are derived from the Droid Bionic phone itself–the dock itself is merely a dumb conduit to extend the keyboard, display, and battery. And since everything power-wise is derived on the phone, this isn’t theoretically tethering in the purest sense, and so Verizon’s plan is technically more accurate than AT&T’s.