Android and iOS subscribers on Verizon Wireless now have an iMessages competitor of their very own.

Verizon Messages, which is immediately available for download in both the Google Play and iTunes App Store (there’s no word of any Windows Phone client) allows smartphone users on the nation’s largest mobile carrier to use their phone number to send text messages from any device loaded onto your device of choice. 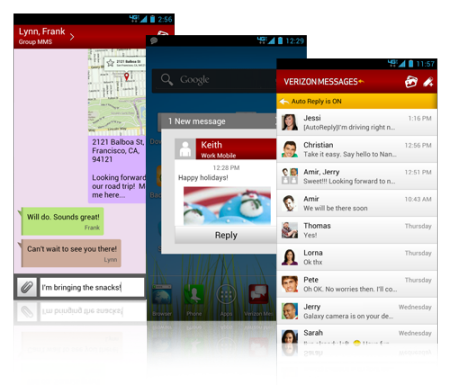 With the app installed, users can also send customized auto replies to anyone who happens to send you a message when you’re away from your device or otherwise occupied. You can then back up all of these messages to external storage for safe keeping or transferring them to another device.

Verizon Messages can also be quickly customized to suit whatever font size or color choice you might prefer. There’s no charge for the app, though the standard rates for your service plan with Verizon will still apply for texts and media messages.

Read More: Why iMessages Will Be Your Favorite New Way to Communicate

The move to offer a more seamless experience for its users has been in the cards for mobile carriers like Verizon since competitors to their messaging dominance first began to proliferate in the last two years. More and more, new solutions from other companies who offer users the ability to communicate via text, or otherwise, for free have begun to pick up steam. By comparison, most carriers charge users an average of $20 for unlimited messaging on top of a data and voice package. This price usually jumps by a third if international messaging is involved. If carriers want to protect what is considered by wireless industry insiders to be a hugely profitable service, they’ll need to find ways of improving the value proposition for users of their own messaging experience.

In comparison, Apple’s iMessages allows users of any device powered by iOS5 or later to send and receive messages via their Apple ID, and avoid ever having to shell out for any text or media message sent from other users of iMessages. Compatible devices include the iPhone 4, iPhone 4S, the second and third generation iPad and Mac OS. Microsoft’s Skype works in much the same manner, though it offers clients on nearly every computing platform imaginable. That includes Windows, Mac OS, Windows Phone, iOS and Android. Users of the application can send messages without having to incur any sort of fee, and have the ability to place and receive phone calls from other users and landline phones for a flat monthly fee.

The use of both iMessages and Skype does require either mobile data or Wi-Fi to be enabled. Users will still have to pay any data charges they incur to their carrier.