Throughout the day, I’ve been hearing from owners of 4G LTE devices on Verizon who are saying that Verizon’s next-generation network is down. And after a quick poll of GBM staff that own 4G LTE devices, I think it’s safe to say that something is amiss as our devices are also experiencing a data outage. It’s unclear at this point how widespread this outage is, or if it’s affecting every 4G LTE device.

Verizon, to my knowledge hasn’t said anything in regards to the problem.

Right now, we’re seeing HTC ThunderBolt‘s without data, a USB modem that has gone down, a Samsung Stratosphere that can’t get data, but it does appear that voice is still intact. 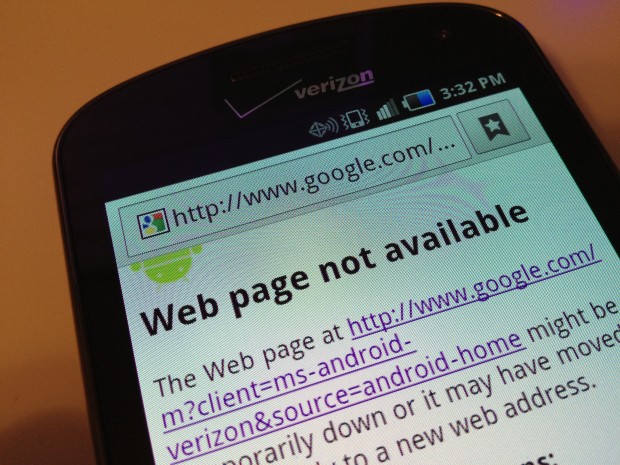 3G-only devices appear to be fine so it looks like this is an issue with 3G/4G devices only.

We’ll update this story when we hear from Verizon but right now, we have to ask.

Are you able to access voice and data on your 4G LTE device?

If you recall, the same thing happened right around the time the Samsung Droid Charge was supposed to launch, leading to a fairly lengthy delay. Might that be why those rumors about a Galaxy Nexus delay have been circling.

Verizon Wireless is aware of the 4G outage, but does not have an estimated time of resolution (ETR). Unfortunately, this means 4G subscribers will have to make do with voice and text service until further notice. 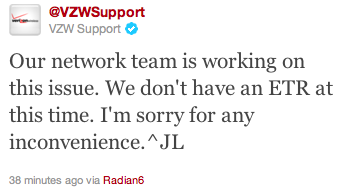 The above Tweet was sent by the Verizon Wireless support team at about 12:45 pm PDT.

Verizon has issued this statement to us in regards to the outage:

Verizon Wireless engineers have been working to resolve an issue with 4GLTE service that is affecting some customers’ 4G devices. 3G data and voice devices are unaffected. All customers’ voice calls and text messages continue to go through. In the past 24 hours, some 4GLTE customers have reported their devices are operating on 3G data service where they would normally get 4G. Some have reported no issues, others that data access is either intermittent or unavailable. We are working to resolve the issue as quickly as possible.

So, looks like you could be without data for awhile folks.