Shoppers in the midwest have two real options when comparing cell phone carriers if 4G LTE is important, which leads many to compare Verizon vs. AT&T in a variety of areas from coverage and customer service to phone selection and network speeds.

Thankfully AT&T and Verizon now carry many of the same smartphones and tablets and both carriers offer shred data plans and programs to let shoppers upgrade to a new phone early.

Verizon’s 4G LTE network is still much larger than AT&T, but AT&T is still growing, turning on 4G LTE networks in new locations almost every month. While the Verizon vs. AT&T 4G LTE argument is not as pronounced in San Francisco or New York where 4G LTE coverage is fairly widespread, it is a bigger question here in the midwest where carriers take longer to deliver the latest technology to consumers. 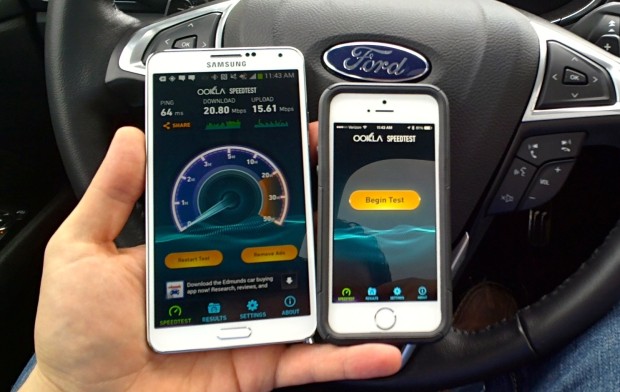 Check out the speedtest of Verizon v.s AT&T 4G LTE on the Note 3 and the iPhone 5s.

We compared AT&T’s 4G LTE network to Verizon’s 4G LTE network in Ohio. These speedtests took place in Findlay, Ohio where AT&T is testing a 4G LTE network expansion. This is very much Verizon country in terms of subscribers, which could play a role in the speeds we saw. While AT&T smartphones sold in the last two years are able to connect to 4G LTE networks, there simply may be fewer AT&T subscribers in this area who are connecting to this network. A similar speedtest in Fort Wayne during September delivered Verizon 4G LTE speeds that put AT&T’s performance in this test to shame.

To test this we used two different devices, but connected to the same server using the same Speedtest.net app for three back to back tests in the same location.

In the screenshot below you can see the results of multiple speed test comparisons, highlighting the varying speeds of 4G LTE networks as well as the difference between Verizon and AT&T in Findlay Ohio. 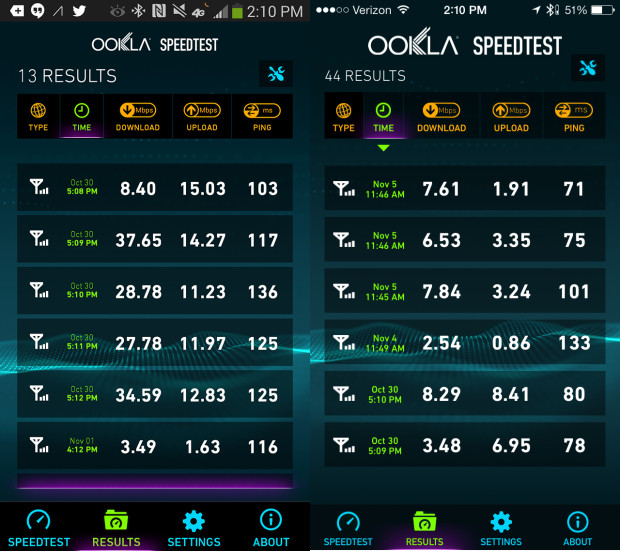 As we mentioned, 4G LTE service varies dramatically within a city, so the best thing to do if you are considering a switch is to ask friends what their service is like and if speed is important ask them to use the free Speedtest.net app on iPhone or Android to compare speeds for you.