It’s now clear that Verizon is suffering from a massive 4G LTE outage nationwide as an outpouring of users of Big Red’s premium service have reported that their 4G LTE devices cannot get data. In addition, the carrier itself has confirmed that it’s aware of the issue, that it’s working on it, but that it currently has no Estimated Time of Resolution (ETR) as far as a fix is concerned.

We can confirm that GBM staff in San Jose, New York City, Ohio and San Francisco are all experiencing outages on 4G LTE powered devices and we have heard from people in Nashville, Los Angeles, Saginaw, Michigan, Chicago, and more telling us that they too are not able to access Verizon’s 4G LTE network.

If you’re unaware, Verizon’s 4G LTE network is its premium service. Data speeds are approximately 10 times faster than those found on Verizon’s 3G-EVDO network. And while the carrier charges the same for both 3G and 4G data plans, it has put a premium on 4G LTE devices with smartphones costing $300 on a new two-year contract. 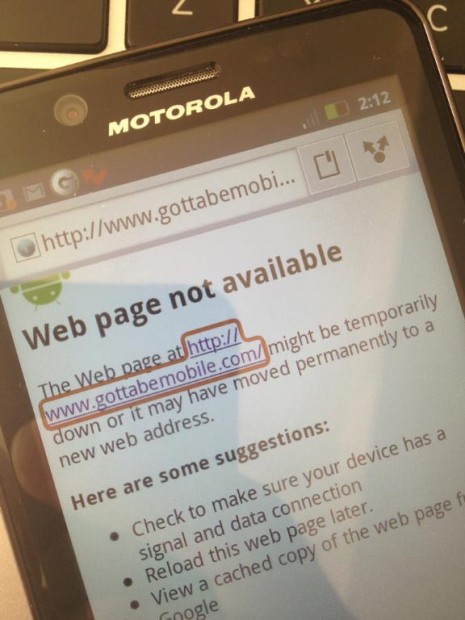 Unfortunately, this is not uncharted territory for Verizon. It has been here before.

The carrier’s 4G LTE network went down back in September and it also went down nationwide just before the carrier launched the Samsung Droid Charge back in April of this year.

Strangely, Verizon is poised to launch another 4G LTE smartphone in the coming days, the Samsung Galaxy Nexus, and it’s possible that this outage may have delayed it beyond its rumored December 9th launch.

Update: Verizon has issued this statement to us in regards to the outage:

Verizon Wireless engineers have been working to resolve an issue with 4GLTE service that is affecting some customers’ 4G devices. 3G data and voice devices are unaffected. All customers’ voice calls and text messages continue to go through. In the past 24 hours, some 4GLTE customers have reported their devices are operating on 3G data service where they would normally get 4G. Some have reported no issues, others that data access is either intermittent or unavailable. We are working to resolve the issue as quickly as possible.