Yesterday, we found out that there was something RIM-related in the pipeline for today and it turns out that it’s likely going to be Verizon’s BlackBerry Bold 9930 that will be the phone that is announced today. How do we know this? Well, Verizon took it upon itself to release a lengthy little preview video on its own website for your viewing pleasure. It was cleverly hidden under the BlackBerry Bold 9650 name but the folks over at CrackBerry were easily able to point out that the device is not the 9650 but the 9930. We had seen Verizon’s device leak out a few days ago so we figured it was probably only a matter of time before RIM and Big Red made it official. 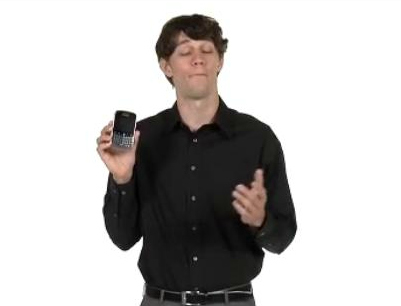 Sadly, the video offers up no information on a release date or pricing for the device so it’s possible that we might be left in the dark whenever RIM and Verizon get around to officially announcing this thing. Verizon’s device is going to join T-Mobile’s BlackBerry Bold 9900 and it’s possible that we’ll see some variants on AT&T and Sprint as well, although neither has leaked out just yet.

If you’re curious about features, the BlackBerry Bold 9930 has a 1.2GHz processor, a 2.8-inch capacitive touchscreen, 5MP camera with 720p video recording, a full BlackBerry style QWERTY keyboard, 8GB of on board storage space, built-in compass, and RIM’s new BlackBerry OS, BlackBerry 7. And if you watch the video all the way through, our man Blake here seems to think it has 4G LTE capabilities as well.

I sincerely doubt that that is the case but you never know. So, for those of you that have been waiting for a flagship BlackBerry smartphone on Verizon, it appears that today is going to be your lucky day.