Verizon is rapidly expanding its 4G LTE network here in the United States and with that expansion comes marketing. Unfortunately, unlike the awesome Droid commercials that Big Red has run in the past, the commercials for it’s 4G LTE network are painfully bad. The latest is a prime example. Instead of explosions and cyborgs and awesomeness, we have two couples, a dunk tank, a Danny Bonaduce type character, and a commercial devoid of a punchline. Consider this a plea to Verizon on behalf of the staff at GBM to bring back the explosions and robots and awesomeness in place of what’s going on here. You can’t tell me you’d rather watch this over 4G LTE robots smashing 3G AT&T branded ones. 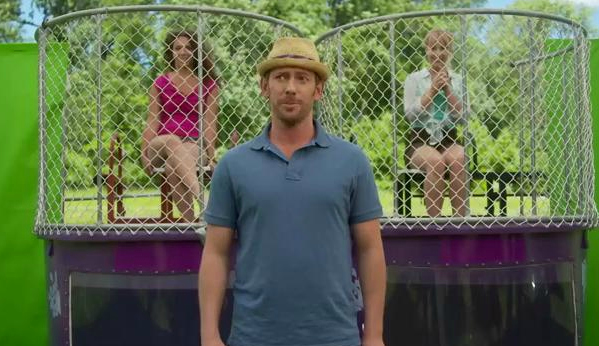 Also, we realize that HSPA+ is slower than LTE. We get it. Do the same dunk contest when AT&T launches its 4G LTE network and maybe the commercial would make sense.

Verizon’s other latest is a masterpiece in recycled trash. You may recall the dorky commercial that Verizon aired just a little while ago that featured a curly haired gentlemen that sort of resembles a young me. This is just a rehash of that and shows no ingenuity whatsoever at a time when great marketing is absolutely necessary with how crowded the smartphone market is. And that’s not even the worst part about the commercial. No, the worst part is that Verizon seems to think its unwise to market the PlayStation aspect of the Xperia Play. Instead, the commercial touts the predictable Android Market app numbers.All I am saying is that if I saw these on TV, I wouldn’t want to buy what’s being sold and I thought that that was the point of commercials. Do something about this, Verizon. Pronto.
Related Topics:4G4G LTEcommercialDealsLTEmarketingverizonverizon wireless