VertDesk Review: A Standing Desk on a Budget

The VertDesk is made by a company called Beyond the Office Door, which specializes in desks, office chairs and a variety of other products focused on ergonomics. Their most talked-about product, however, is the VertDesk, which is a standing desk that is motor-adjustable. That means that it can be raised and lowered with the push of a button.

The VertDesk starts at $689, which makes it one of the cheapest motorized standing desks on the market. This is good news for users who are looking for an inexpensive, yet capable desk that can get the job done.

If you don’t already know, sitting down all day is quite bad for your health, so standing desks have been becoming more and more popular.

After seeing our post about some of the best and affordable do-it-yourself standing desk options, the folks at Beyond the Office Door agree that DIY can be a good way to go for many users, but say that there’s nothing better than the real thing. They want to prove that spending a little extra cash will get you a much better quality desk with more features. I decided to try out a VertDesk, and have used it religiously for about a month now. Here are my findings.

The VertDesk is a rather straightforward desk with a simple design. It won’t turn any heads, but that’s probably a good thing, as it’s simple enough that it could easily fit into an office environment without creating a lot of distraction. The reason that many office buildings don’t allow standing desks is because they stick out like a sore thumb and break the uniformity of an office space. The VertDesk definitely seems like an exception here. 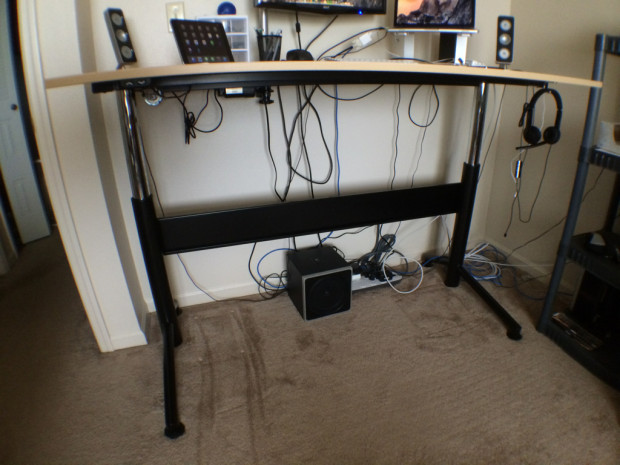 The desk comes with two T-legs and a crossbar as the base. Pistons are used to raise and lower the desk with the help of a small, but capable motor that can raise the desk to a max height of 46.5 inches, which will be high enough for a majority of users. Obviously, if you’re basketball-player height, you might have a problem, but you can simply just put raisers under the T-legs.

The motor itself is fairly quiet and gets the job done well, raising and lowering the desk in about 10 seconds.

The VertDesk comes with a switch that has an up button and a down button to raise and lower the desk. It’s pretty self-explanatory and really easy to use. But what would be awesome was if the controller was programmable, allowing you to set certain heights and have the desk automatically raise and lower itself with just a single press of a button. Luckily, Beyond the Office Door says that they’re working on a programmable controller for the VertDesk and it’ll become a standard option in future iterations of the desk. 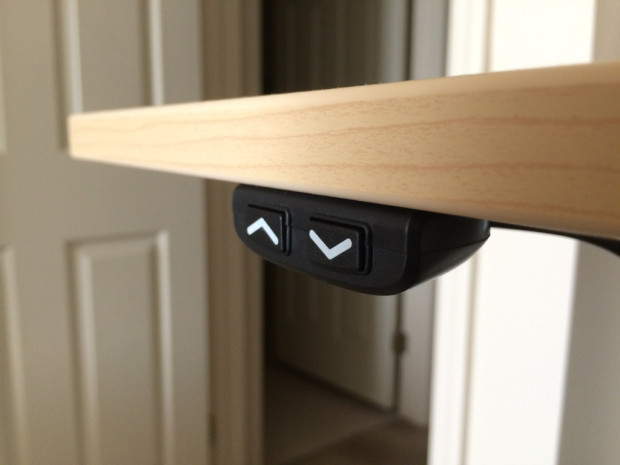 The desk’s surface is made of a laminated 3/4-inch hardwood top and it comes in two styles: “Cherry” or “Hardrock Maple.” The Cherry top is for folks who want a classier look for their standing desk, while the Hardrock Maple gives a more modern vibe, sporting a birch-like surface.

Unfortunately, the VertDesk doesn’t arrive pre-assembled and I had to help the poor FedEx guy carry a couple of the heavy boxes up my apartment stairwell.

All of the parts to the VertDesk are packaged extremely well, and the company puts a lot of focus on how they package certain parts so that they don’t break during shipping. Unpacking everything easily took a good 20 minutes or so, and there was a lot of cardboard and wrapping left over.

Assembling the desk took a couple of hours, but that’s mostly because the instructions are not entirely clear, though they’re clear enough that you can get a feel for what you need to do and figure out the stuff that’s missing.

For example, the motor comes with a long hex rod that connects both of the T-legs for raising and lowering of the desk. The rod obviously has to be connected to the motor, as well as to the two legs, and the instructions tell you to first attach the motor to the left leg and then stick the rod through the motor. But what it doesn’t tell you is that you have to line up the rod so that it not only sticks through the motor, but also connects to the left leg. It took me a while to figure this out. I finally realized that I had to loosen the motor a bit and line it up with the leg so that that rod goes all the way in. 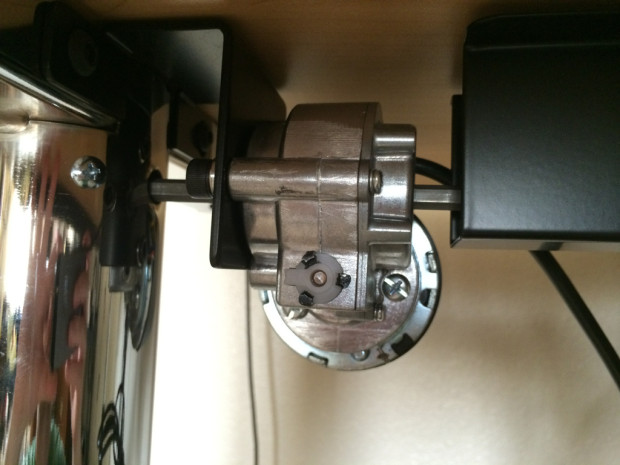 Above: The hex rod goes through the motor and connects to both T-legs.

This easily set me back about 45 minutes, but it felt good once I was finally able to figure it out by watching a couple of assembly videos on YouTube, and it seems this guy came across the same problem.

Once you have both legs connected to the desk, though, further assembly is fairly easy and painless. However, while the instructions say that you only need a screwdriver for assembly, I highly recommend that you use a power drill, because driving screws into wood is extremely difficult if you do it by hand.

I’ll say this: the VertDesk isn’t the best-quality standing desk on the market, and it’s probably on the lower end of the spectrum. In fact, The Wirecutter doesn’t recommend it at all.

However (and this is a big however), standing desks are one of those things where even the cheapest model is better than that cheap DIY solution, and while I’m sure the $1,500 standing desk that The Wirecutter recommends is probably way better than the VertDesk, you really can’t go wrong with a desk that’s just shy of $700 — nearly $800 cheaper.

So what makes the VertDesk so inexpensive? It mostly comes down to the materials used and the motor. 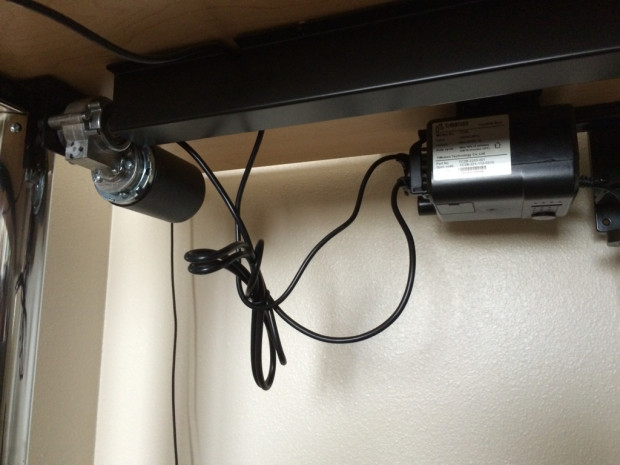 Above: The motor and controller box of the VertDesk.

The VertDesk’s legs are made of steel, which is cheaper than aluminum, but less sustainable. And the motor used in the VertDesk is cheaper and louder than ones used in higher-end desks, using a much more basic technology to raise and lower the desk. However, I never experienced any stuttering with the motor and have never questioned its reliability over the four weeks that I’ve been using it. So while it may be a cheaper motor than high-end desks, it’s certainly nothing to scoff at.

There are many frugal shoppers out there who would never even think about paying $1,500 for a standing desk. $700 is much more feasible. However, for those who want a better, more-expensive option, Beyond the Office Door does make a standing desk that’s a step-up from the VertDesk. It’s called the NewHeights Elegante and it starts at just under $1,200.

Why You Should Use a Standing Desk

If you’re like a lot people who have an office job, you probably sit for the majority of your day at your desk, and you probably only get up to take lunch or use the restroom, but otherwise you’re plopped down in your office chair for a majority of the day. What you’re probably not aware of is just how bad sitting down all day is for you. 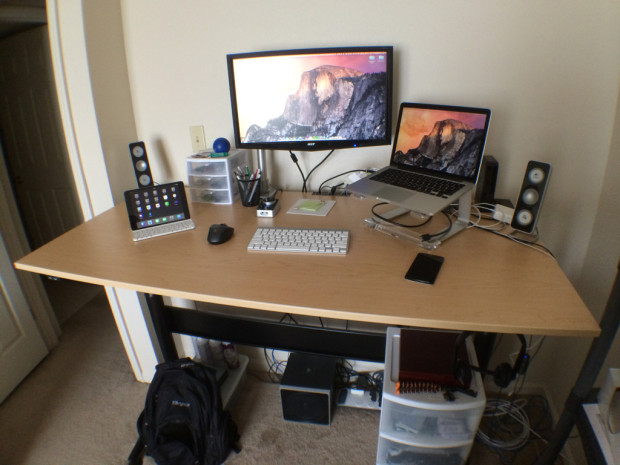 Sitting down all day is pretty bad for your health in the long term. It’s so bad, in fact, that exercising daily can’t even negate the effects of sitting down all day. Standing instead of sitting for a majority of your day is a small change to your daily routine, but it’s a great way to get back into a healthy lifestyle. The VertDesk aims to be that helping hand toward reaching your health goals.

The VertDesk is a standing desk meant for budget-minded consumers, and that’s very clear when you look at the price. It may not have what it takes to compete with the $1,500 options, but it does its best, and its best is quite admirable.

It raises and lowers quickly, with a cushioned start and stop to prevent things on the desk from tipping over and spilling. It’s also pretty sturdy, with the ability to support up to 250 lbs. While I didn’t personally test that weight limit, it at least gives me comfort in knowing that the desk can easily support the measly 20-30 lbs. that I have on the desk currently.