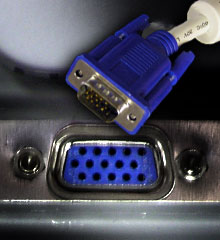 Various PC makers will be laying the VGA port to rest in 2015 and transitioning their computers–desktops and laptops–to the digital DisplayPort and HDMI protocols in 2015. AMD, Dell, Intel, Lenovo, and LG all have announced that they will be dropping the analog VGA and LVDS connections in the company’s AMD and Intel-based computing products.

Digital standards consume less power and support better resolutions and colors than the analog protocols, which were introduced over 20 years ago. Chipmakers Intel and AMD will remove support for the LVDS protocol starting in 2013 in the company’s PC processors, and VGA will begin to disappear in 2015.

DisplayPort will be used in the industry for computer monitors and HDMI will mostly be used on HDTVs. VGA support has largely continued as a legacy interface that’s still popular and widely used in many enterprise environments, especially for monitors and projectors. The newer digital DisplayPort technology is backward compatible with VGA through the use of adapters.

Today, many tablets and smartphones support HDMI output, either natively, through a dock, or via an adapter cable.