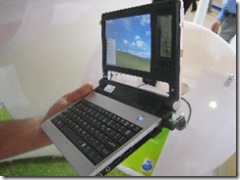 Today at Computex 2007 in Taipei, Taiwan,  VIA revealed the distributors (ODMs), that will bring the new VIA UMPC to market, are Packard Bell (initially in Europe by August) and Everex (in USA).

For the unit in general, the module bay to the right of the display can accommodate a choice of functional modules via a USB interface:

For the Packard Bell unit (name is reportedly either EasyBook XS or EasyNote XS) we have some feature details:

For the Everex model (unknown name):

Matt Miller, of MobileDemand, is reporting for GottaBeMobile.com from Computex 2007. MobileDemand produces the rugged Tablet PC, the xTablet T8600.