When creating the Lumia 1520, Nokia didn’t stop at adding a large high-resolution display. It also added a new anti-reflective coating that completely sets the Lumia 1520 apart, as showcased in a new video uploaded to YouTube.

In that video a Nokia representative places the newly announced Lumia 1520 next to the Samsung Galaxy Note 3 and Apple’s iPhone 5. He then begins opening things on each device’s screen to demonstrate how each display looks in normal lighting conditions. After spending a few moments explaining how the demo works and why it’s so important, he then switches on an overhead lamp to simulate what would happen if a user walked outside with each one.

Surprisingly images put on the Lumia 1520’s screen remain mostly clear. Even white text that users wouldn’t normally be able to read on a sunny day remains perfectly legible. While a message in different colors on the Lumia 1520’s screen reads “This Lumia Has Greatest Display for Outdoors It is a Big 6” FULLHD. And it just got better with a customized notifications on new Glance Screen,” the same message reads “This is just a screen” on the Galaxy Note 3 and iPhone 5 due to them not having the same reflective coating that the Lumia 1520. 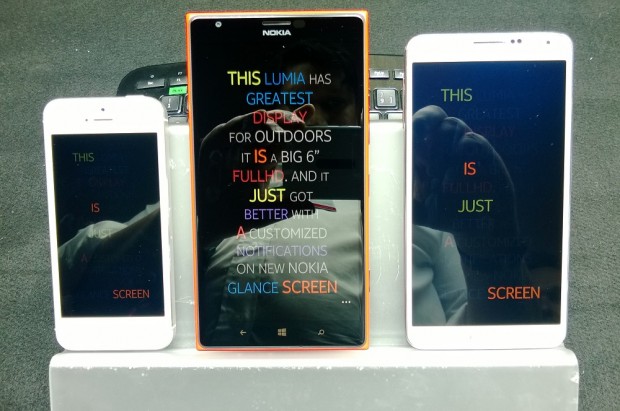 If Nokia’s new reflective coating is that good, it could solve one of the biggest problems plaguing smartphones and tablets. Displays have grown in size and quality over the last few years, however smartphone makers haven’t addressed the glare that makes many devices completely unusable in direct sunlight.

It’s this type of thinking that could make some users diehard fans of Nokia and its devices. Getting the details right, no matter how small, is how luxury brands like BMW and Apple keep customers coming back year after year for new models.

The Lumia 1520 features a 2.2GHz quad-core Qualcomm Snapdragon 800 processor, 2GB of RAM and a 20 megapixel camera that uses the same PureView imaging technology that sets the Lumia 1020 apart from other high-end smartphone’s cameras. As it has a 6-inch display, its Nokia first foray into creating phablets – phones that have screens too large to be considered just smartphones.

The Lumia 1520 will arrive on AT&T sometime this year, however the carrier hasn’t detailed how much the device will cost or a specific launch date.