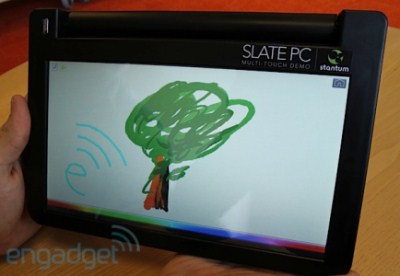 The last time we saw Stantum’s pressure sensitive multi-touch technology in action it was in a rough prototype caught on video by Engadget. This time, Engadget has been given hands-on time with a more polished device, a slate tablet built out of a Dell Mini 10.

Very impressive technology. Lot of good demo software loaded on the device (though not the best testament for pen input at the beginning). The paint program not only shows the accuracy of the multi-touch but also the many levels of the pressure sensitivity. Leaps a big hurdle between touch input and active pen input (though still lacking the cursor control of active). Definitely need to keep an eye on Stantum. Video after the jump.