Video: Up Close with the BlackBerry PlayBook 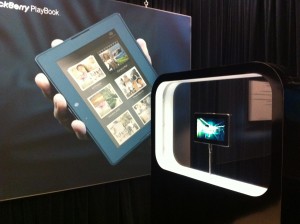 Yesterday I got a chance to take a look at the BlackBerry PlayBook at DEVCON 2010. Unfortunately, Research in Motion still isn’t ready to let us go hands on with the PlayBook, sandwiching three prototypes between glass and running a video loop. But it was close enough to get a good sense of the device.

The BlackBerry PlayBook is less than 10mm thick and it looks even thinner in person. It looks to be a very portable device, but it’s too big to put in a pocket and too small to warrant a full on gadget bag. If this thing takes off there are going to be a lot of happy man-purse manufacturers.

How the BlackBerry PlayBook performs in the real world is anyone’s guess until RIM starts putting them out there, but it’s clear that the exterior is a cut above what we see from many consumer tablet manufacturers. There’s nothing cheap looking about the PlayBook.

One thing that I find interesting is that all of the PlayBook’s ports and buttons are centered on the long edges of the device. This isn’t much of a problem assuming it’s used in landscape mode, but it looks like the volume, play/pause and power button will be right where users rest their thumbs and fingers when in portrait mode. The symmetry looks good in a display case, but my first impression is that RIM put form before function.

RIM goes as far to call the BlacBerry PlayBook the first professional tablet, but we know that there have been many business tablets over the years. It’s a no-brainer that organizations that’ve deployed thousands of BlackBerry smartphones and maintain BlackBerry servers will be drawn to the PlayBook. But RIM is walking a fine line between positioning the PlayBook as a productivity device and an entertainment device. Every business person is human and appreciate music, movies and games as much as the next guy. I found it interesting that the PlayBook demo room’s posters mostly portrayed consumer-oriented apps, with email being the only productivity app showcased. 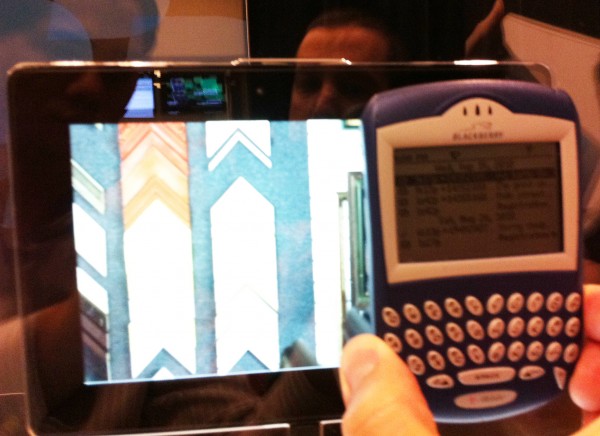 The BlackBerry sure has evolved over the past few years.

I’m looking forward to getting a real hands on with the Playbook to give RIM’s new OS a spin. I’m not the only one who wants to check it out. I spoke with Oliver Bussmann, SAP’s chief information officer, yesterday and he told me they’re very eager to get more people to use devices like it. I’ll be sharing a recap of our conversation shortly.