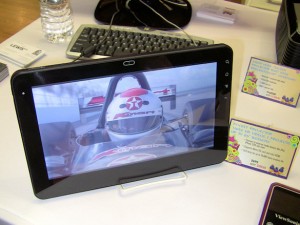 I’m still slightly scratching my head at this and I’ll tell you why in a minute. But first, here’s the news. Viewsonic was one of the manufacturers that made Tablet/Slate news at IFA, announcing two distinctly different Tablets: the 7 inch Viewpad which is running Android 2.2 on a 600MHz Snapdragon processor, and a 10 inch Tablet that dual boots Windows 7 and Android 1.6 running on an Intel Atom N455 processor. Now it seems Viewsonic has another 10 incher prepping for launch. This one is running Android 2.2 on an NVIDIA Tegra 2-based platform. The folks at HotHardware spied it last night at Pepcom.

Here’s where I’m scratching my head. While I applaud Viewsonic’s efforts here on all fronts it seems like they might be throwing various types of undercooked pasta at the proverbial wall here hoping something is going to stick. Granted you can make arguments for the different OS configurations, and it isn’t a bad idea to cover your flanks, but the three different models on three different processors is bound to cause some confusion. Furthermore, leaving aside the dual booting model that has an out of date Android 1.6 OS as one of its flavors, both the ViewPad and this new G Tablet are running Android 2.2, which Google has stated isn’t designed, much less optimized for Tablets.

Perhaps it is just me, but I’m just not getting the logic here, even though I can understand it.