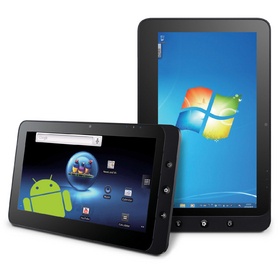 Just five short months since its official announcement, the ViewSonic ViewPad 10 running both Windows 7 and Android 1.6 is coming to North America. Okay, five months isn’t really that short a span of time. How not short? We’ve had reviews posted since October.

Okay, technically, we don’t have reviews of the ViewPad 10. Rather, our reviews and shortcuts and various other stories are about the TEGA v2 from our friend Hugo Ortega of Tegatech (and GBM). Both tablets are made by the same original design manufacturer and rebranded by the respective companies. The specs for the 32GB model match what we have, so Warner’s review should still apply. We even have two shortcuts about web browsers on the TEGA v2: Firefox tweaked for the touchscreen and Google Chrome.