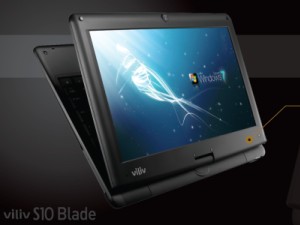 Chinese Korean blog Naver has new product shots and info on the Viliv S10 Blade convertible tablet netbook. Xavier previously put together a video hands-on back in September at IDF 2009. That model had a single-touch screen and 1.33GHz Intel Atom processor with additional options to be announced. The new info seems to show those options are beefier processors (1.6 GHz Z530 and 2.0 GHz Z550) and multi-touch input. They’ve also added a 128GB SSD option. Increased speed and storage are always welcomed upgrades, but it appears multi-touch is the only qualititative change and no mention of if the screen is still resistive or changed to capacitive.

No word on price, so possibly these will be more expensive than the $500 base price previously cited. Hopefully they’ve cleaned up the custom interface too.