This morning Virgin Mobile updated its website to include the iPhone 5s and the iPhone 5c and in an email to Gotta Be Mobile confirmed the October 1st release date.

Virgin Mobile’s plans include 4G LTE which means the iPhone 5s and iPhone 5c will be able to connect at the fastest speeds available, depending on coverage. Sadly, the Virgin Mobile coverage is powered by Sprint, which means 4G LTE is less prevalent than on AT&T and Verizon which just announced their 400th and 500th 4G LTE markets. 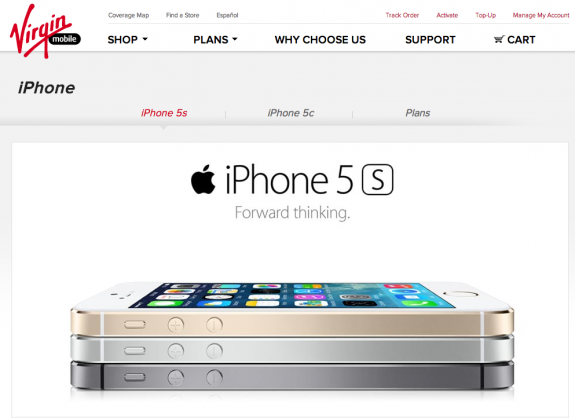 The Virgin Mobile iPhone 5s release date is set for October 1st, but pricing is not yet official.

The Virgin Mobile iPhone 5s comes with unlimited data, but an asterisk kindly points out that after 2.5GB of full speed usage the account will be throttled, users can gain an extra 1GB of full speed data usage with the Mobile hotspot upgrade.

Users can buy the Virgin Mobile iPhone 5s and activate it on a plan as low as $30 a month with autopay and 300 minutes, $40 a month for 1,200 minutes or $50 a month for unlimited. All of these plans include unlimited text and the “unlimited data” with limits as outlined above.

At this point Virgin Mobile is not talking about the price of their iPhone 5s or iPhone 5c, but based on past actions for the iPhone 5, users can expect to pay the same price as those buying off contract at a major carrier. We may only see the 16GB model of the iPhone 5s and iPhone 5c sold at Virgin Mobile, but it is not clear yet.

Virgin Mobile’s website shows all colors of the iPhone 5s, so it’s possible you can buy a gold iPhone 5s on Virgin Mobile, assuming you can find on in stock.

Other than the plans, this pre-paid iPhone 5s is the same iPhone found on the bigger contract carriers. Assuming Virgin Mobile isn’t able to pull off some type of iPhone 5s deal, the total cost of a Virgin Mobile iPhone 5s over two years could be as low as $1,369, savings of about $300 over a contract on Verizon, AT&T or T-Mobile.