Vista and Ink - a missed opportunity

Since installing Vista on my ThinkPad X41 Tablet PC, I’ve been taking a hard look at the Out of Box experience in regards to Ink. I’ve been playing with Vista on various machines the past several months, but this is the first stable release that I’ve felt comfortable enough to wipe my X41 clean and go for it. Although a lot has been done with the TIP, Flicks, and handwriting personalization, I’m very disappointed with the lack of Ink integration with Vista. Let me explain with some example applications and user scenarios. I won’t be addressing bugs in this article, but I’ll be concentrating on issues as it relates to Origami, Out of the Box experiences, and the message this sends the overall community. I’ll then address why this concerns me so much. 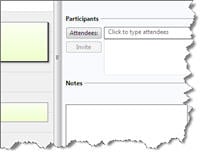 First, Microsoft has done some really good things by including a new Calendar and an upgraded Contacts application from the Address Book. They recognized that a new computer ought to allow someone to be productive with PIM stuff right away with no additional purchase. These are simple programs that let a new user begin to use their computer to track contacts and manage their calendar without the need to buy Outlook.  These are perfect applications for an Origami type of device. The applications are very simple, but quite effective. Being the curious Tablet PC kind of guy that I am, I started looking for the Ink support that I expected to be there. The TIP is definitely supported (with some context awareness bugs), but that is about it. Both Contacts and Calendar support a Note field for tasks, appointments, and contacts, but there are no controls to allow someone to ink a note directly into a field. Why is it a bad thing that you can’t ink in that field? Well, imagine that I bought my wife one of those nice pink Sahara Tablet PCs or an Origami device. I tell her – “you can take notes on it in the grocery store, while you are at the doctor’s office, etc. Just pick it up and use the pen – no worries.” The next time she goes shopping, she pulls out her 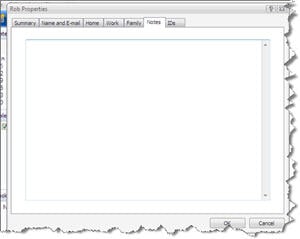 Origami and wants to jot a few things down on her Grocery task. But wait – she has to Ink the whole thing using the TIP sentence by sentence, fool with text conversion issues, etc. All she wants to do is write a note down on her task list– not worry about how to do it and fixing stuff that got messed up. There is an immediate transparency disconnect – she can’t do what she wants to do naturally – something that has been marketed by Microsoft from the beginning. Imagine the brand new customer who walks into Best Buy to get a Tablet PC, brings it home and immediately finds that he can’t Ink hardly anywhere except Journal and Sticky Notes. He has to use the TIP almost everywhere. In these two new applications, Microsoft had a chance to make Ink an integral part of that experience and break down that barrier. They chose not to do so.

Second, Windows Mail is the upgrade to Outlook Express. There have been many a posts about the desire to ink directly into Outlook Express. We’ve been looking forward to Vista with hopes that Microsoft would take their own advice and integrate Ink into their own application. Not so. Inking an email in Windows Mail is not supported. I’ve talked before about the scenario of a new Tablet PC user or student that fires up their new tablet pc and the first thing they want to do is write an email to a friend who still has a regular laptop or desktop -you know, the typical Geeky bragging rights. You can imagine the “man, I can’t wait to show him this” thought going through his head. But wait, he can’t do it. He has to use the TIP and send it in text. What a missed opportunity by Microsoft to sell even more Tablet PCs by including Ink support out of the box with email.

Third, what about that Experience Pack that is currently available for download? Out of the box, why can’t I write on the desktop with Vista? Or what about the Crossword puzzle? That should be in the Games section by default. Load us up with a lot of Ink Games. Out of the box, make the customer thankful he spent that extra money to buy a Tablet PC and not wondering “is this it?”. Thankfully, the Snipping Tool is now included with Vista, but they did away with that wonderful pie shaped navigational device and chose a traditional floating tool bar with drop down menus.

Now, this might sound like I’m being pretty hard on Microsoft, and I don’t doubt that I’m going to make a few folks mad by writing this article. There are significant improvemets in Vista as it releates to Tablet PC; however, I don’t think it is enough at this critical juncture. We are approaching 4 years this November since the Tablet PC was introduced. Microsoft has preached to the ISV community the entire time that they need to add ink support directly into their apps: through context awareness, taking ink notes directly into Note type fields, support direct ink input and automatic conversion to text, etc. They spend a ton of money developing sample code and utilities that show the ISVs how to do it. Four years after the launch and on the eve of releasing a long shelf life OS, and Microsoft themselves are still mostly relying on the TIP for input. Also, what about the nauseating naysayers out there that continually preach “the Tablet PC is dead and is not going anywhere” party line. Microsoft had an opportunity to tell them “Hey, not only is it alive and well, we believe in it so much, that we made Ink support virtually a transparent experience – use your pen wherever you want, ink in the fields, write on the desktop, ink that email, ink that appointment or note within the appointment – all Out of the Box.”   In my opinion, they have missed a great opportunity to move the tablet experience to a whole new level and change the conversation throughout the ISV, OEM, and general community.

Now, why does this bother me so much? Vista is going to be here to stay for quite a while. The experience we have with Vista right now is going to be with us for at least another  4 – 5 years. Barring a major service pack or feature release that addresses these issues, it is going to be 8 – 9 years after the Tablet PC launched before we can expect to see another significant opportunity for Microsoft to get this one right. It is a missed opportunity at a very important point in the life of the Tablet PC.