I frequently utilize the system tray icons to change battery scenarios, viewing wireless networks, etc, especially when my Tablet PC is in tablet mode. I’m finding the user interface (UI) and experience to be frustrating. 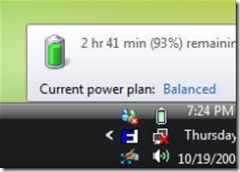 Here is an example. When I take my mouse or pen, and hover it over the battery icon, I see the following pop-up

dialog box (left). I get all the necessary information, which is very good. However, the Current Power Plan setting, which shows Balanced appears to be hyperlinked. If I want to change that and move my mouse or pen to the dialog box, it disappears. This is very confusing to the user because something appears hyperlinked, but you can’t do anything with the dialogue box but look at it.

To actually change the power plan, you have to single click the icon, which displays this dialog box (right). What gets really confusing and shows the inconsistency in the use of colors and hyperlinks in these dialog boxes is that the “Learn how to …” text is hyperlinked and can be clicked on. 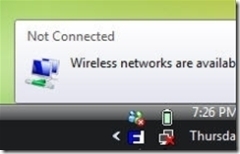 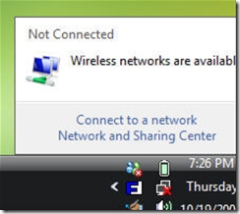 I’m going to submit this as a UI bug, even though it is probably too late in the release cycle. User experience issues like this are frustrating, but fixable.

Edited to remove references to “double-click”.