The Vogel’s Ringo iPad 2 Mounting system will put your iPad “anywhere” with a special case that has a round hole in the back fit for the company’s various Ringo mounting solutions.

The whole system allows you to use your iPad hands free in home and business locations as well as on the road, where it transforms the iPad into a back seat entertainment system for the kids at a fraction of the price the auto manufacturers charge.

The mounting system comes with a case that lets you use your iPad mounted in one of three ways: to a wall, on a tabletop stand, or attached to the headrest of your car. Each of the three uses a ring that attaches to the round hole on the back of the case.

Please note that the video review does not properly show the functionality of the car mounting system. The second video below shows how to properly install the car mount.

This video properly displays the car mount installation and removal. 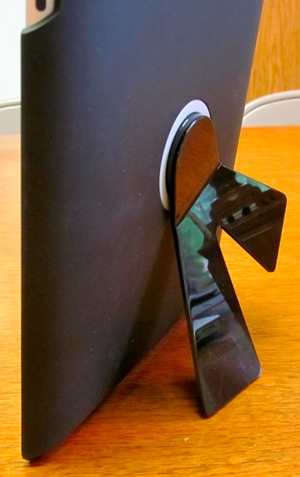 As a simple tabletop stand, the system works well if you only want to view content on the iPad 2. Pop your iPad 2 into the case, which covers the back of the iPad and has a hole in the center. The hole receives the stand which snaps into place. To remove it just press the leg of the stand towards the case until it pops out. At first I was afraid I’d break the leg because you have to push hard and it bends, but it is designed this way, so push that leg has hard as you can.

The stand works in both portrait mode, with a longer leg, and landscape mode, with a shorter leg. It holds the iPad up at only one viewing angle, so don’t plan to adjust it for things like glare or for another viewing angle.

If you want to use your iPad for showing off video or pictures, like a salesman might do at a trade show, it works well. The Tabletop Stand also would be perfect for using your iPad as a digital picture frame.

Tapping on the screen with the iPad in the case and stand doesn’t knock it over easily. So you could use your iPad that way while tapping away on the screen. I just prefer to have my iPad at a lower angle when I’m using it for things other than viewing movies or pictures. A cook could use one of the many cooking apps with the iPad resting on the counter.

Below is the Vodel’s RingO iPad Mount demo video. 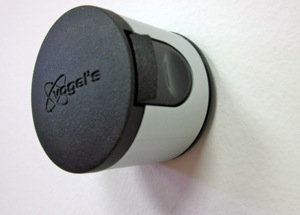 Install the Vogel’s Ringo Wall Mount ring by driving a screw into any vertical flat surface. You then press the iPad, with the back cover on it, onto the mount. You can rotate it between portrait and landscape modes in a 360 degree circle. To remove it just pinch both sides of the mount and it pops out.

The mount feels like it will hold and shouldn’t fall of the mount. If you fasten it securely with the screw, the mount itself should stay put as swell.

I could see business people setting up a kiosk with an iPad on the mount. We’ve heard of restaurants using iPads for menus. They could mount them on the way to the hostess stand. At home you could put one on your office wall to use up off the desk and hands free. You could also mount the iPad next to the fridge in the kitchen and use it as a family information center. 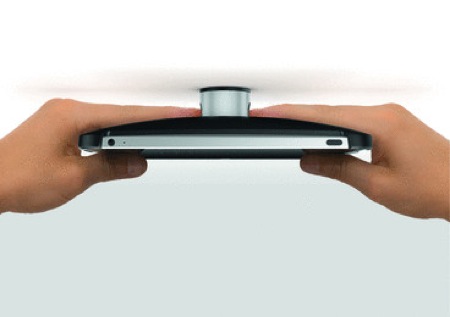 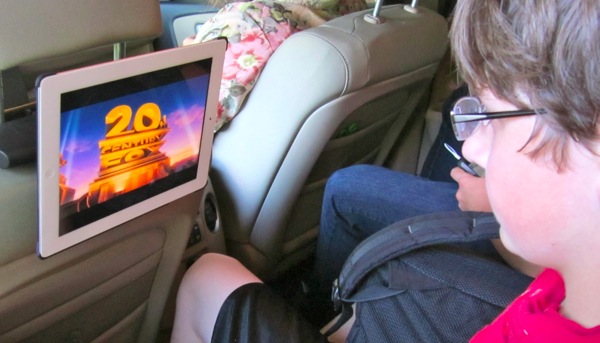 My son really enjoyed this part of the system. He watched part of a movie on our way to supper in Hickory, a 20 minute drive. If you have younger children you will find this really useful on long car rides. When my boys were younger we had a rear-seat entertainment system. It came as part of the used car we bought. When we got our new car last year, we looked into getting one and found that they were $1,000 factory installed. Get a $500 iPad and this mounting system and you save over $400. 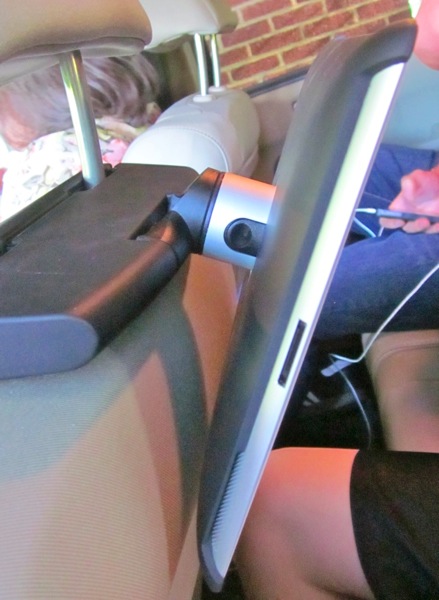 You will notice that the mount swivels up and down. We accidentally installed it upside down, so it should swivel up instead of down like it does in the above picture. But you get the idea. 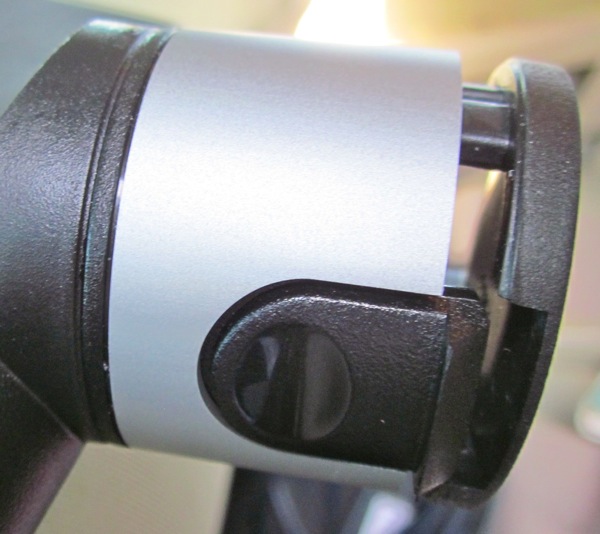 You have to be very careful to train your kids how to pull the iPad off the mount. My son just pulled and as you can see it pops the rubber cover off the mount. You have to pinch both sides of the Ringo mount for it to pop off easily.

I got confused when trying to install the in-car mount. The company’s web site says:

No tools are needed to connect a CarMount, which is securely fixed to the front seat headrest.

The large lever on the device releases the back bar so you can pull off the bar and insert a long metal post through the front part of the mount. At first I didn’t even realize that the button was a button. I used a Torx screwdriver to remove the back part of the mount. That isn’t necessary. Just grab the mounty from the front with the ring touching the palm of your hand, and pull back on the button lever and pull off the backing with the other hand.

Despite the confusing installation, I really like this system for the car.

Unfortunately, the case is the biggest weakness of the whole solution. I don’t like the rubbery feel of it and it attracts dust and lint worse than the iPad screen attracts fingerprints. Oh, and it attracts oily fingerprints as well. Fortunately, it does hold the iPad well. You can pop it out of the case easily, to put on a better case for day to day use, but I don’t think it will come off unless you want it to.

The case allows you to access all the buttons and the dock connector without a hitch. The camera on the iPad 2 is also accessible, so you can take pictures. In fact, with the table stand you might be able to use it as a tripod to get sharper images with it. I prefer cases that cover the screen, but you do get a clear screen protector in the box.

I wish the case and mount connector didn’t add so much thickness to the iPad. With the case on the iPad 2 it is more than twice as thick (see above). I understand that this is necessary so that the mount connectors can slide into the hole but I don’t think I will use the case for protecting my iPad unless I’m mounting the iPad in one of the three systems. The moment I’m done using the mounting system, I will take the case off and replace it with a better one for day top day use.

Like many all-in-one solutions, the Vogel’s RingO system does a good job in the car, on the wall and on a table, but doesn’t do a great job at one individual task. The benefits come form having a system that works in so many places, and costs much less than a traditional in car entertainment system, even with the iPad included.

If you need all of these mounting solutions, Vogel’s offers a good solution. The wall mount system performed the best, and offers a nice way to mount your iPad in areas which would typically be inaccessible. The car mount isn’t perfect, but the cost savings over traditional in-car entertainment systems helps us overlook some installation issues. The tabletop stand limits the user with only one angle and there are more versatile tabletop iPad stands than this. I would only use this if I was already wanting one or both of the other two mounting solutions in Vogel’s system.

You can find out more about the system at Tablet On the Wall. The retail price for the entire system runs $119. Or, if you want to get the entire system, save some money at Amazon, which sells them now for less than $84. The version compatible with the older iPad costs a few dollars less. If you only want one part of the system, you can order them for under $70 at Amazon as well. If all you need is the wall mount, get the “starter pack” for a lot less. The car mount saves you only about $14 at Amazon, so you might as well get the entire system and have the option of the wall mount and the tabletop stand. The starter pack and car mount can be purchased at Apple as well.