While hardware manufacturers are looking to the future of flexible displays to offer consumers larger screens that fold or roll up to become more compact for travel, Google is saying that we don’t even need the display anymore. The search giant, which has invested a lot of resources into the Google Search and Google Now app for Android is saying that the display will become unnecessary as consumers will rely on voice, rather than touch, to interact with the phones of the future.

Google is pushing new boundaries as well with its Google Glass concept, which mitigates the need for consumers to always have to pull a phone out of their pockets by moving the display up to eye level in the heads up display format. Using voice, users are able to navigate through Glass’ interface, so touchscreens are not necessary even in this early exploration of this conceptual technology that’s currently only available to developers. 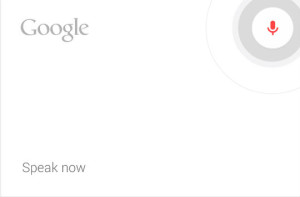 As Google senior engineering director Scott Huffman said, there are now a wide array of devices that would allow for a touchless future.

“We have a super computer in our pockets, but also one in our watch, one in our glasses, maybe on our lapel as well as our laptop. Some of those have a screen and a keyboard, but some won’t, and we’re seeing dramatic growth in the numbers of people interacting through voice recognition,” Huffman said in an interview with The Guardian.

Even phones are becoming more speech aware, especially with the latest Android 4.4 KitKat operating system and always-on voice where users can command the phone and Google to wake up by saying a voice command like “OK, Google.” The latest updates to Google Now also allows the Google Search app to speak back and confirm dictations to the user so that they don’t need to always be looking at the display to see if Google’s text-to-speech and speech-to-text engines are accurate.

Other technologies include smartwatches, which Samsung is exploring with, and other forms of wearables that Motorola is toying with.

As to how soon we’ll see phones without displays hit the market, it’s still too early to tell.