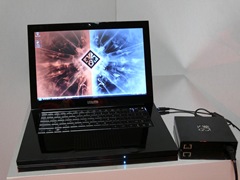 When HP acquired Voodoo, they acquired more than just a high-end gaming system manufacturer. Voodoo has some serious design skills, and they proved it with the appropriately named Voodoo Envy.

This is a seriously nice system. Thin, light, and powerful, it will cause a serious case of envy in anyone watching you use it. At only 0.7 inches thick, it’s one of the thinnest systems out there, thinner even than the MacBook Air. It’s a 13.3" widescreen with a replaceable battery and more than one USB port. Those being some of my major complaints with the Air, I’m pretty happy. The Envy also just feels more solid than the Airs I’ve used – the hinges don’t flex and the system is more balanced. With a full carbon fiber chassis, the Envy is available in custom colors as well.

The Envy also sports a multi-touch touchpad and a unique feature – the power brick includes a wired ethernet jack that acts as an 802.11n router for the Envy. This is a sweet way to implement wired ethernet. The jack for wired eithernet is thicker than the system is, so there is no way to put it on the Envy itself. By putting it in the power brick, you get the speed of a dedicated 802.11n connection – FAST – plus, when traveling, you get your own WiFi router anywhere you can plug in to eithernet and power.

Priced at $2099, the Envy is not a cheap system, but it compares well with the Air, particularly given the feature set. Voodoo is being positioned as a luxury brand for HP, and the Envy is one of their first products since the acquisition. It’s a fine debut for Voodoo in the custom notebook market.