This was the week of the Amazon Kindle, Black Friday shopping mania, and of course a chance to pause and give thanks, if you celebrate the US holiday Thanksgiving. Of course the march of wacky and intriguing gadgets also continued. I’m always amazed at some of things that get marketed today as I wonder who would ever buy them, but I guess someone must. In any event, enjoy this Weekend’s Wacky Gadget Roundup.

If you’re a skateboarder, I’m sure you’ve heard of motorized versions. How about one with BlueTooth? GroundSurf’s skateboard is controlled by a touch screen BlueTooth mobile phone as well as sensors in built into the board itself. Not launched yet, but supposedly you can launch yourself onto the sidewalk next spring. Via Crave.

Doctor Who fans out there might be interested in this: The Doctor Who Sonic Screwdriver Flashlight. Via BoingBoing. 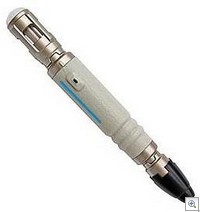 I’m not sure how well this would make it through the TSA hurdles at US airports these days, but Tony, The Robot Suitcase, will supposedly follow you around without bumping into things. That is if it makes it to market in 2009. Via The Raw Feed.

You can blow these Bi-Color LED candles on and off as well as change the colors. This might come in handy. My wife loves candles, and also liked to fall asleep late at night leaving them on. Via ThinkGeek. 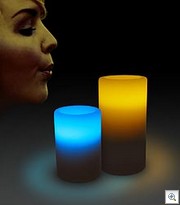 How about toting that USB key with all that precious data around in a Dog Tag like locket. Not cheap at $349, it comes in sterling silver. Via Luxist. 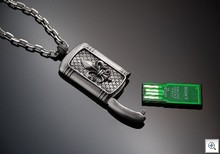 Speaking of USB keys, we see all sorts of oddities for those these days. Check out NifNaks.com for these creature like covers. A bit creepy for my tastes and I’m not sure calling the product a ““data wormÃ¢â‚¬Â is a good idea.

Don’t get too excited if you are a knife thrower wanna-be. This is just a storage device, but the Throwzini Knife Block might make a guest think twice about second guessing you in the kitchen. 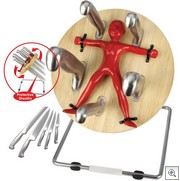