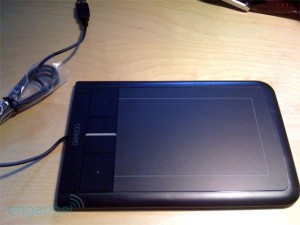 After passing on their tip that Wacom has built a multi-touch version of their Bamboo tablet, Engadget has confirmed the device exists, and they have the photos to back it up.

Their tipster claims to have been using the device, priced at $69, on his Mac running Snow Leopard with no problems. No mention of whether he’s tried it on Windows 7 (I’m guessing not), but it’s got the Windows compatibility label. There’s also mention that, aside from being a really big version of a Macbook multi-touch trackpad, it offers customized application-specific gestures. I’m thinking of two-finger rotation for volume control.

Now that I think of it, I was expecting something like this for Mac back when multi-touch was announced for the Macbook trackpads. I guess the Wacom guys were just waiting for the bigger Windows PC market to catch up. I might have to get me one. Check out Engadget for more photos.