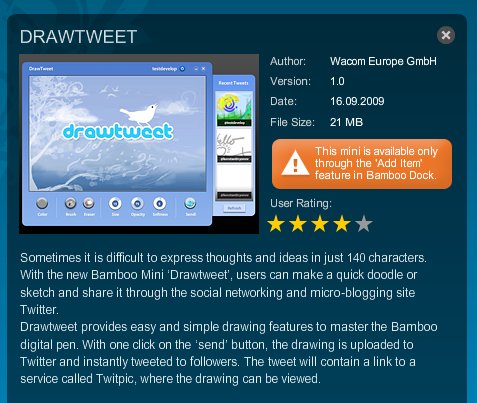 Well, my newfound obsession with finding info on new Wacom products has already paid off. No, I still know nothing about their multi-touch plans, but I have discovered that Wacom Europe has been offering a tool called Bamboo Dock, which adds all sorts of functionality to their Bamboo tablet (and I’m guessing their other tablets), including drawing, handwriting recognition, Mah Jongg, and most recently, a Twitter client called Drawtweet to tweet drawings.

I’m not in a position to test this out right now, but I watched the video demo on YouTube. Looks pretty straightforward. No official word that it works with any form of pen input, but the developer of Drawtweet reports that the entire Dock system is built on Adobe Air and and that anyone can install it, so it’s not locked to Bamboo or even Wacom pen input in general. Hopefully that also means we in the States can use it. I may have to set up an official Sumocat Twitter account to get in on the ground floor of ink tweeting.