Walmart’s iPad mini Black Friday deal is for a full price iPad mini, with a $100 gift card. That’s as good as cutting $100 off the price of this tablet.  An iPad mini for $199 is cheaper than an iPod touch and arguably a better overall gift for many users.

Most of the iPad mini Black Friday deals will sell out within a few minutes of the store opening, and will go to shoppers who skipped Thanksgiving lunch and dinner to camp outside of a store. 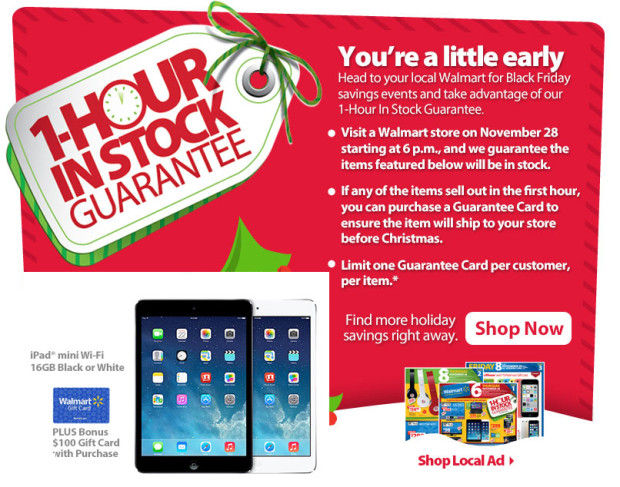 The Walmart Black Friday 2013 ad reveals an easy to get iPad Mini deal that drops the price by $100.

Even if you don’t wait in line, as long as you get to the area where this deal is taking place within the first hour you can buy the iPad mini or any of these other items at the Black Friday prices even if they are out of stock. If Walmart runs out of the iPad mini you can buy one for delivery to your local Walmart before Christmas. The Guarantee Card is available if you pay the full price, so there is no putting 10% down and paying the rest later. It’s not clear if you get the gift card immediately or when the iPad mini arrives.

Shoppers will need to register the guarantee card online at Walmart by Sunday December 1st or the card will convert to a standard Walmart gift card.

Walmart is also selling a 32-inch HDTV and a 60-inch HDTV, Call of Duty:Ghosts, GTA 5, Assassin’s Creed 4, NBA 2k14 and other games as well as some other items as part of this 1 hour in stock guarantee.

Many other stores will promise a limited quantity of a doorbuster that is only good for the first dozen people in line, who often wait hours for the best deals.

For comparison, the iPad mini is $299 at Target with a $75 gift card and may see a small discount direct from Apple.