The Walmart Black Friday 2013 ad continues to deliver deals that are worthy of Black Friday, with a $100 gift card for the purchase of many Android smartphone you would actually want to use.

In addition to the iPhone 5s and iPhone 5c deal which includes a $75 gift card during Walmart’s Black Friday sales there are two major Android Black Friday deals and a few others that might be worth checking out.

The Walmart Black Friday 2013 ad spans multiple days, and the deals on smartphones start on Friday at 8AM while supplies last. Sadly these deals are not like the iPad mini deal which is guaranteed in stock for the first hour.

The $100 Walmart Black Friday gift card is valid on future purchases, so you will need to spend the cash on these deals up front. You will also need to be eligible for a new contract outside and willing to sign up for two years. 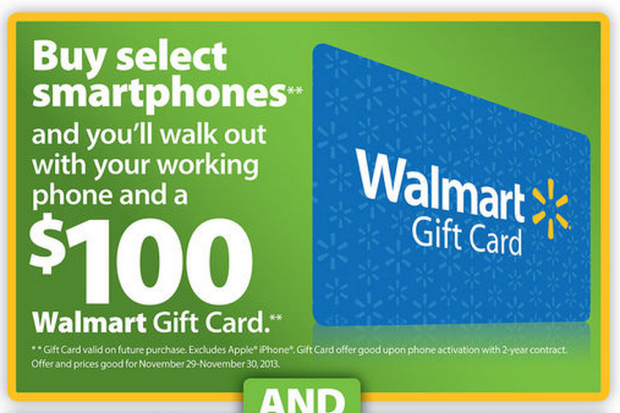 Walmart will let users trade an old phone in for up to $300 towards the purchase price. This could net you some extra cash to spend on Black Friday. You’ll want to double-check trade in values on NextWorth and Gazelle.

The Samsung Galaxy S4 is available for $99 with a two-year contract, which is essentially free on contract after the gift card. We’ve seen some big deals on the Galaxy S4, but this is better than we currently see on Amazon. The deal is valid on Sprint, AT&T and Verizon in multiple colors. Read our Galaxy S4 review.

The Moto X is $49 on contract for AT&T, Sprint and Verizon. This does not include customization options like carrier stores offer but colors will vary from store to store. With this deal users will get a $100 Walmart gift card, effectively earning $50. Moto X review.

The Walmart Black Friday 2013 ad also shows a Samsung Galaxy S3 for 97 cents, with a $100 gift card. This phone is a year old, but it is still a nice device that may be a good fit for some users. This is only available on Verizon. Samsung Galaxy S3 Review.

Finally, there is a Samsung Galaxy Mega on AT&T for $79 on contract. This phone with a 6.3-inch display includes a $100 gift card and is an attractive device. Read our Galaxy Mega review.