Walmart– its not just for groceries and cheap microwaves anymore. 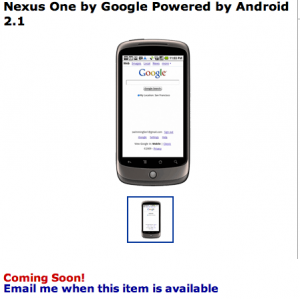 According to several web sites, a new page has shown up on Walmart.com listing the Google Nexus One as “Coming Soon”.  There are no other details listed right now.  No news on prices, contracts, etc et al.  No one is really sure what this means.  For all we know, Walmart may just sell the phones and leave the contracts out of it.    Right now, the only way you can get a Nexus One is to order it through the Google web site.

What is good about this?  People will probably be able to get a hands on demo with a Nexus One to see if they want to order one.  As of now, the only way anyone can try a Nexus One is to either have one for demo, played with one at CES, or just ordered it anyways.  Its like they are taking a page from Barnes and Noble with having a Nook at their stores for people to try out.  I think its a good idea.  Not a lot of people have used the Android OS and this way, they can try it out and make an informed decision

UPDATE:  Looks like Walmart is denying this whole thing, even though the page is still live on the Walmart site.  We’ll see what happens.