Want Amazon Video On Demand On Your Nook Tablet Or Any Other Android Device?

Now you can have it. Yep, one of the few things that was supposed to only be available on the Kindle Fire is not out there running free in the world and available to install on your Nook Touch. You know how to do that, right?

How is this possible? Well, just like the Nook Tablet, the Kindle Fire runs on Android, and Android apps come in little packages called APKs, and APKs can be copied off of Android devices easily for backing up or just installing on a different Android device.

All the different sections of the Kindle Fire, including the Video on Demand section, are simply apps designed for that device. Ergo, their APKs can be copied and installed on other Android devices.

And that’s just what someone did. 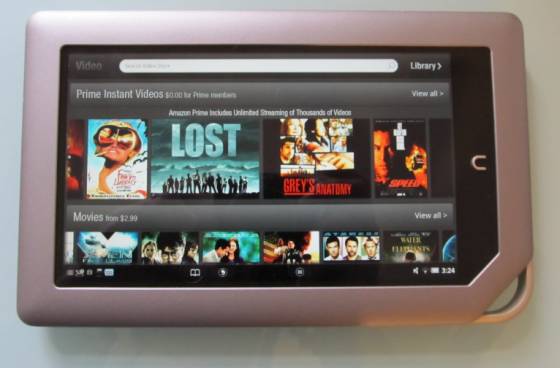 Brad over at Mobiputing installed the app on the Nook Tablet and it appears to be running well. In order to sign in you have to buy something or, if you’re a Prime member, try to stream a video. Otherwise, you should have the same experience as on the Kindle Fire.

The app will probably work on any tablet, but apparently it was designed to work specifically on 1024 x 600 resolution displays, so it might look weird on your phone or Honeycomb tablet. Unless you have a Samsung Galaxy Tab Plus, which has that same resolution. Excellent!

The app apparently won’t work on rooted devices, but again: it’s a regular app, so you don’t need to root your device to install it.

So, let’s take stock. In the past two days we’ve discovered that you can install a bunch of unauthorized apps on the Kindle Fire and pretty much any app on the Nook Touch, including the Nook and Kindle apps, respectively, and also including third-party app stores like Amazon or GetJar. You can also extract apps from the Kindle Fire and install them on other devices. I wonder is someone will extract the Library app from the Nook Tablet next, because it’s much better than the Nook app on the Android Market.

Today is a great day for anyone who owns a Nook or a Kindle tablet.