What happens when a country discovers a box full of fake iPhones?

In most cases the iPhones are destroyed to prevent disgruntled customers and market disruptions.

In Russia, that destruction includes a camera and a bulldozer more suited for taking down a house than a hundred fake iPhones.

The video below claims to show the destruction of fake iPhones in Russia, and it’s definitely a fun one to watch.

The best part of the iPhone vs. Bulldozer video starts at a minute in, after the Russian authorities line up the counterfeit iPhones. The YouTube description claims the Bulldozer destroyed 127 fake iPhone 4 and iPhone 4S devices from China.

Bitrebels posted the video above, which shows a large bulldozer running over a box full of fake iPhones. While the iPhone 5 is the flagship product today, this video shows the destruction of fake iPhone 4s and iPhone 4S fakes.

Even though the iPhones in the video are fakes, it’s tough to see so many gadgets ground up into dust and debris by a huge piece of machinery. It did make us wonder if the OtterBox Armor Series iPhone case could withstand this torture as well as it did getting run over by a car.

To avoid a fake iPhone, we suggest buying from a reputable seller and avoiding third-party services when possible. If you plan to buy an iPhone on eBay or another service beware of deals that seem to good to be true. Scambook offers a list of tips to avoid buying a fake iPhone 5.

The gallery below shows the destruction of the fake iPhones before the bulldozer pushed them into a pile of dirt. 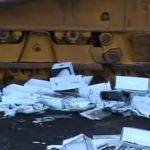 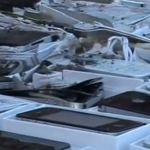 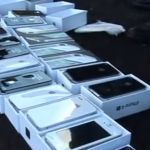 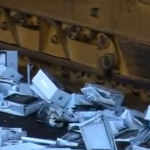 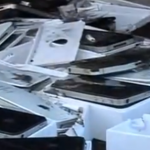 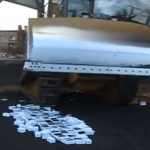