Tactus Technologies showed off a 7-inch Android tablet with a touch screen, that morphs into a “physical” keyboard on the screen so users can type quicker and more accurately.

We first saw the Tactus Morphing Tactile display in an online demo in mid-2013, and now the company is ready to show off the technology inside a 7-inch Android tablet.

We caught up with Tactus at CES 2013 to go hands on with the Tactus Morphing Tactile keyboard.

It’s impressive to watch the tactile keyboard rise out of the touch screen, though the demo unit on display shows some visible marks on the screen when the keyboard retracts. The semi-physical keyboard is nice to type on, offering more feedback than a traditional touch screen, and some travel. 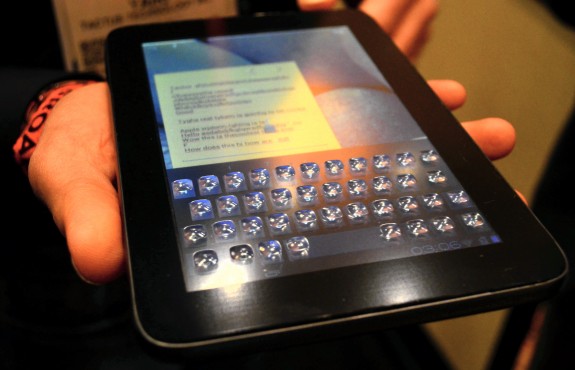 Close up of the tactile touch screen display on the Tactus Technology demo.

The Tactus technology can make tactile buttons appear out of nowhere, but it is limited to pre-configured positions, so there’s no way for a keyboard option to show up while typing and then morph again to a controller for Grand Theft Auto and then again for another app or game.

Tactus isn’t saying what devices we might see the morphing touch screen display technology in, but they did say that they hope to be in production in late 2013 or early 2014.

At CES 2013 we’re seeing many new screen technologies on display. Sharp showed off several IGZO displays, which could be on the way to an iPhone according to rumors. We also saw several flexible displays from Sharp, and Samsung showed off a flexible smartphone prototype during their CES 2013 keynote. Based on rumors we don’t expect a flexible display on the Samsung Galaxy S4, but we might see it on smartphones arriving in 2014.